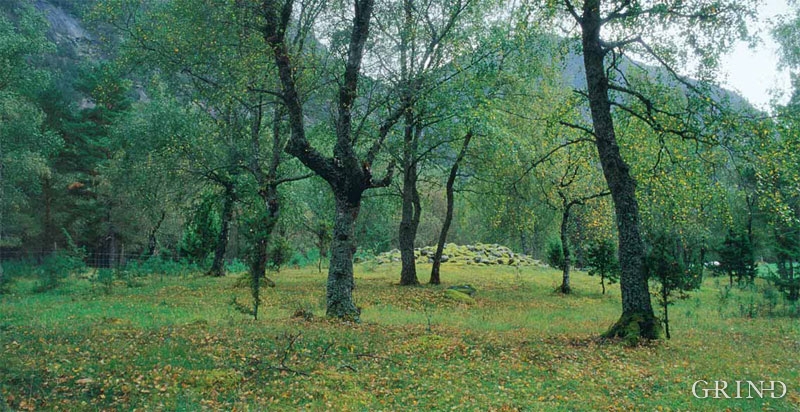 The biggest prehistoric burial site in Hordaland is situated at Hæreid. On top of the terrace expanse, inside the fine birch garden, is where they lie, the mounds and stone piles, on their own or in clusters, large and small, round and elongated – at least 350 in all.

Most of the heaps are small, between two and five metres across. Some of these may be clearing piles without a grave beneath. A collection of larger piles, 12 – 13 m across or more, and more than one metre high, are situated in a belt on either side of the road, to the south on the terrace.

The Hæreid field has not been explored in detail. Only nine finds are known. Of these only one comes from archaeological excavation. The finds stretch from around 500 to the year 1000. But we may be quite certain that some of the mounds contain older graves.

Pot chards and bones from a burned grave may be dated to the migration time (400-600 A.D.). The other finds are from late Iron Age (600-1000 A.D.). Amongst these are axes, and arrow points, remains of a sword, a bronze clasp, a bridle, cooking pots made of steatite, a frying pan and remains of a shield.

We may wonder why Eidfjord in particular had such a large burial field. At Lægreid there have also been a lot of mounds, and in Øvre Eidfjord there are several bigger fields. Either the burial customs may have been different here than in other settlements, so that most of the dead, not just a few, were honoured with a grave and a pile of stones. Or the population must have been very large. The experts have often discussed this without reaching a definite conclusion.

Men’s and women’s costumes from early Iron Age. The use of clasps was an important part of the dress.