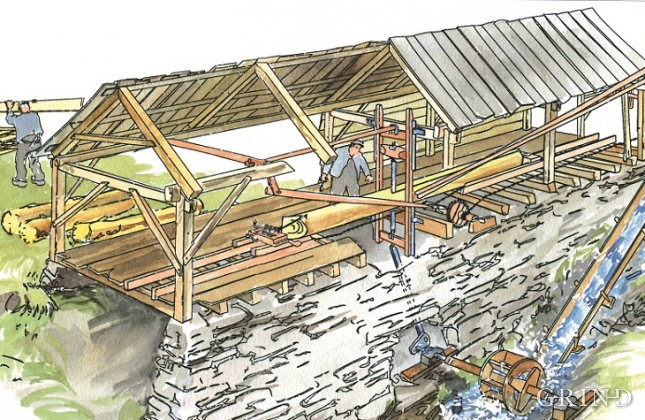 THE SASH SAWS IN TØRVIKBYGD

Down by the fjord on the farm Berge in Tørvikbygd, is Stekkavika – a sheltered eastward facing harbour, protected against the fjord by headlands and rocks, even manifest in the name. Here is also a comprehensive milieu of coastal industry, with boathouses and sea-sheds that belong to the farms Berge, Heradstveit and Halleråker. Belonging to the farm Berge there is also a mill-house, circular saw, workshop for sloop building, and – a little further up into the woods – the old water-powered sash-saw.

The sash-saw in Stekka is one of the few sash-saws left of the one-bladed type. The sawmill was built in 1823, but there have been sawmills in Tørvikbygd long before this time. In the tax register for 1603 these sawmills are mentioned: Drage sawmill, which has cut 150 boards and planks, and Augastad sawmill, which “is lying abandoned”. The Augastad sawmill was probably situated by the same waterfall as the present sawmill in Grindfossen, a 20 minutes’ walk up into the outlying fields from Augastad. After this sawmill was taken out of operation in the 1950s, it is only the sash-saw at Stekka, belonging to the two holdings at Berge, which has been maintained.

When the sash-saws came into use in the 1500s, they revolutionised the medieval way of cutting boards and planks of the timber logs. Formerly each log was split and could thus only provide two planks; “tiler” (slabs). With the new saws several planks could be cut from one log. From old times, Tørvikbygd has been rich in pine and oak forest, it is therefore to be expected that the saws have been in use there for a long time.

The Stekka saw may be called semi-automatic, and the construction is clever. The saw frame is attached to “korlestanga” a rod that transfers power from the undershot water wheel. Directly behind the saw fence is the cogwheel. A chain that is coiled around the cogwheel is attached to “the cradle”. From the top of the water channel is the lever arm, attached to the “nodding” cylinder, enabling the sliding rod to push forward every time the saw frame is up, and pulls the log forward one notch, towards the sawblade.

The sash-saw saws planks from the logs in their full width without cutting the edges. This is why this type of saw is well suited to cut broad planks for the boat-builders, and this is one of the reasons why the saw has kept its standing so long in the fjord communities. There have been boat-builders in many a shed along the fjord – a useful additional industry for many farms. In Stekka boats and sloops have been built through generations, and this activity has lasted up until the last war, through Stekka Skibsbyggeri A/S. “Risseskuret” where they designed and cut the ribs, is still standing in Stekka.

Already in the 1970s it was obvious that there was a lot of interest in preserving and securing the sash-saw and the coastal industrial milieu in Stekka. In connection with the establishment of a landscape preservation area around Bergevatnet (lake) with the old oak forest above Stekka – a forest that has provided material for sloop building – the sash-saw has also been given its formal preservation. Here is therefore a rare complete historical milieu, both with regard to sawmill and coastal industry.

In connection with the Architecture Preservation Year in 1975 work was initiated for the restoration of the sash-saw and reconstruction/rebuilding of the tumbled down shed, in close cooperation with the landowners and initiators in the local community. These works were financed by the Directorate for Cultural Heritage, the Arts Council of Norway and Hordaland County Municipality.

The sash-saw was restored first, both the saw-shed, water channel and water wheel. Thereafter, a cog-jointed shed from 1793, belonging to the farm Halleråker, was rebuilt to its original form and size, with high foundation walls and natural stone-slabs on the roof. A frame-built shed on the farm Tuften was restored in 1982. Some of the other sheds are probably very old, one of them is mentioned in 1691,and another may have been built in the 1600s. There are also visible remains of several older sheds, and there is a plan to complete the coastal industrial milieu at Stekka as far as possible and keep the sash-saw in operation.