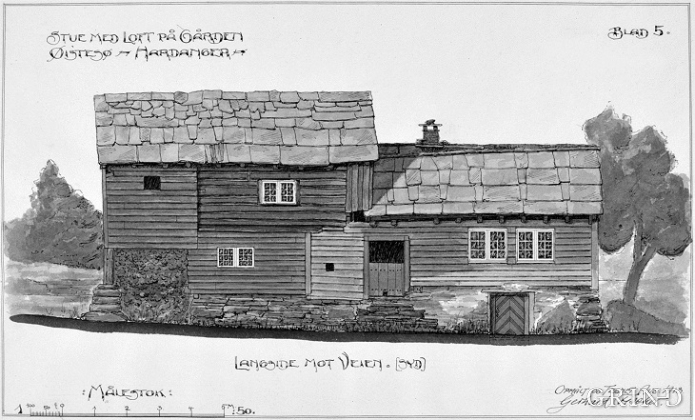 One of the houses in the old Øystese hamlet, a smokehouse from the 1700s, joined to store, loft and shed, was measured out by Gerhard Fischer in 1915. It is this house that stands in the row at Storeteigen today, together with a “kraata-stova” - decorated house - and a storehouse on stilts from Vavollen. The house from Øystese hamlet was for many years on Stopulshaugen as a rural museum, before the museum was moved to Storeteigen. This is a small smallholding from the end of the 1700s, with dwelling house and hayshed built together. The joined buildings from Øystese show an interesting variant; dwelling house and shed, with slate-covered shed and covered passageway, gathered under the same roof. At Storeteigen we also find one of the oldest furniture workshops in Kvam.

Floor plan of the dwelling house and shed from Øystesetunet (from Brochmann, O. (1944) Hus i Norge. Oslo.)

The decorated border in Vavollstova has been repainted with basis in an older, original pattern (above).

“Kroting” of the smoke-houses is a form of decoration with roots in the Middle Ages. With a lime “soup” and brick red the “krota” women drew up bands of beautiful geometrical patterns on the timber when the houses were prepared for weddings and the main festivities.

In the fields at Øystese, in Steinsdalen, at Aksnes and in many other places, are simple buildings, open, frame-built houses. They were called troskykkjer, and the name derives from their use, for storing haymaking poles (troer) out in the hayfields between each haymaking season. We find the same simple framework buildings as boatsheds and as “forest sheds” in the Kvam forest, or Steinskogen, as was the name of the forest in former times.

It is the stave building in its “primeval“ form that we meet here, a prehistoric building tradition up to our time. From what we know today, this type of construction has been in use in West Norway right from the Bronze Age up to the 1900s. A couple of staves with crossbeam, “beten”, make up a frame, built with an axe, saw and drill, often from materials found on the spot, these buildings represent an “ecological” building tradition. We leave behind a large chapter of Norwegian building history  when these buildings are no longer in use. Why there are so many of these “troskykkjene” in the fields in Kvam is an open question. This is a construction method widely used in all communities in Hordaland. The last stave sheds of this framework type were built at Osterøy as late as the 1950s.

The smallholding at Eikehaugen. (Svein Nord).