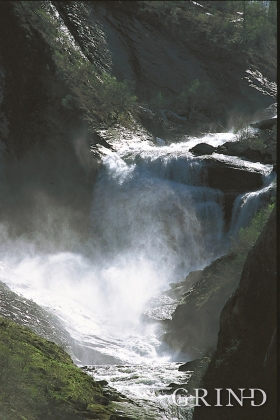 The waterfall at the top of Tokagjelet. (Helge Sunde)

THE CANYON THAT TAILORED ITSELF TO HARDANGER FJORD

There is a sharp transition between the wide valley at Kvamskogen and the narrow Tokagjelet. The transition is no less dramatic when we come out of the crooked tunnels far down in the canyon, and the open Steinsdalen valley spreads out before us. The canyon both separates and joins together different epochs in western Norway's history.

Before the ice ages, the valley from Jonshøgdi and eastwards toward the start of Tokagjelet was a side-valley to "Hardanger Valley". During this epoch, the river flowed gently through a sloping and rounded landscape until it ended in the larger "Hardanger River", roughly where Aksnes lies today, but much higher in the terrain. "Hardanger River" did not reach the sea until it was some place south of Bømlo.

When the ice age set in, the glaciers took over the carving work from the rivers. With great power, the ice quickly carved further into the valley that had been created by the "Hardanger River”. Hardangerfjord and the smaller side-fjords were eventually carved out; this work was carried out from the coast inward over land. After several ice ages, the fjord reached in to Kvam during a time when the ice was absent. During these periods the river from Kvamskogen was very active. It was a short distance and a big fall down to Steinsdalen, which then was an arm of the fjord. The carving by the river was fast and effective, and Tokagjelet was created.

The work is not finished yet: the river is still carving away at the bottom of the canyon. This has created the steep valley sides and a lot of rock slides from the slopes - the road has even been ruined by rock slides occasionally. The stones that collect in the bottom of the canyon become tools for the continued carving. The transport of coarse material occurs in periods of flooding – "the hundred year flood" is of course more effective than the common floods. The largest stones stay in place until they break up into smaller stones, which the river can transport.

The canyon zig-zags. This is because the river finds it easiest to carve along the weaker zones in the bedrock. These run either along boundaries between rock layers in the phyllite (northeast- southwest) or along fractures that run perpendicularly to the layering (southeast-northwest). When the river carves along the layering, a V-shaped valley is formed (drawing to the right), with the northwest side as the steepest side. Tok in the name Tokagjelet refers to the Norwegian word «tak», which means "roof", and refers to the steep mountain walls and overhangs. The gentler slope follows the layering in the bedrock. It is easiest to study the conditions in Tokagjelet from the old road on the outside of the lowermost tunnel (Snauhaugtunnelen).

Tokagjelet – a big fracture in the bedrock in an ancient landscape from before the ice ages. (Masaoki Adachi)

In 1871 the driveable road between Steinsdalen from Norheimsund, and from 1885 the county council decided to grant money for road construction from Tysse to Norheimsund. One of the most difficult sections of the road was the three kilometres through Tokagjelet. Here it was necessary to blast out tunnels or half tunnels; a daring and demanding road project.

The first road project in Tokagjelet was completed after 22 years, in 1907. It was now possible to travel from Bergen to Norheimsund in 9 hours: first 11/2 hour by train to Trengereid, followed by 71/2 hours with horse transport from there. In 1909 the hotel owner Nils N.Sandven bought a four cylinder “Windhof”. With this he drove Norheimsund-Trengereid in three hours. In the 1990s the oldest road through Tokagjelet has been restored as a cycle road.