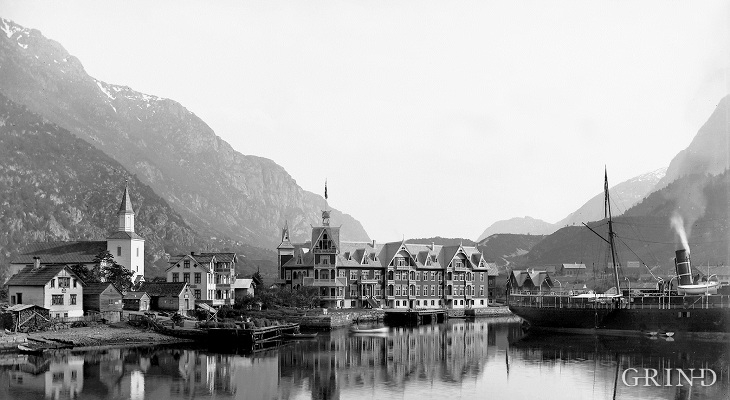 Odda around the turn of the former century, with the new Hotel Hardanger, built in 1896. (Knud Knudsen, owner: Billedsamlingen, Universitetsbiblioteket i Bergen (KK 549(21x27))).

The pioneering tourists in the 1830s-40s brought a momentum in the tourist traffic to the fjord and mountain country Norway. At the time Odda was a hidden Shangri-La at the bottom of Sørfjorden; the farm and the church on the green headland at the fjord. But when the steamship traffic opened the fjord landscape for tourism, in a few years Odda parish in Søndre Bergenhus County became the focal point for travellers in West Norway.

Tourism provided seasonal work and additional income for the people in the settlement. This peak in tourism lasted until the outbreak of WWI in 1914. In 1904 Odda had 83 calls by foreign tourist ships, altogether 12,000 tourists came by the sea route. The industry took off in earnest when the route between Newcastle and Bergen opened in 1890. In these years Odda developed rapidly and was well equipped with hotels:”Hotel Hardanger”, “Grand Hotel”, “Hotel Odda”, “Hotel Folgefonn”, “Hotel Låtefoss” and “Buer Hotel”. A new “Hotel Hardanger “ was opened in 1896 after the original one burned down. It was one of the largest wooden buildings in Norway, decorated with woodcarvings by Lars Kinsarvik and murals by Nils Bergslien. Later on, from 1917, this hotel became town hall in Odda for many years until it was pulled down in 1977. Both Englishmen and Germans made their mark on the tourist environment in Odda during these years, the latter, literally, in the wake of Emperor Wilhelm II and “Hohenzollern”, which was a certain annual guest in Hardanger from 1889-1914.

In 1900 he coastal settlement of Odda counted 27 dwellings and 285 inhabitants, hotel hosts, traders, craftsmen and transporters. People of all ages took part in the tourist industry. The county governor for Søndre Bergenhus County wrote in 1905 that there are no statistics that show what effect the tourist industry had for the district, but it is a question of large sums.

Odda in 1908, the year when the production started at the carbide and cyanide factory. (photo: Knud Knudsen & Co., owner: Billedsamlingen, Universitetsbiblioteket i Bergen (KK pk 150)).