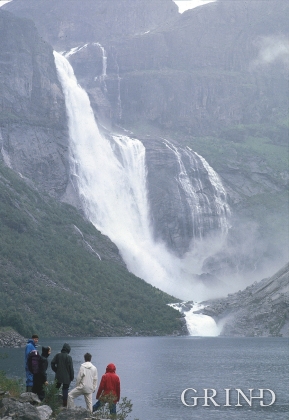 Ringedalsfossen innermost in Skjeggedalen – at one of the rare moments when the waterfall appears in its full splendour. This was one of the most impressive waterfalls in Norway. (Svein Nord)

Den Norske Turistforening (The Norwegian Tourist Association)(DNT) built this road as a riding track in the years 1898-1904. At that time it was DNT’s biggest road project. The waterfalls in Skjeggedal were great tourist attractions, which DNT later managed to have protected from power development. The DNT emblem, painted in gold and red, was cut into the mountain wall at Rjukande waterfall. It is 2.5 m high and still clearly visible.

The tourist road is built on the south side of the valley. It leads through deciduous forest and large scree areas below the dramatic mountainside and ascends steeply in hairpin bends at Rjukande waterfall. The view down into the canyon is enthralling. In times of the great tourist traffic there was a café at Svelgarhaugen, remains of the walls are still visible. At Lonena a large, solid bridge leads over the river to the public road. The bridge has been restored. The continuation of the road follows roughly the same route as the tourist road and the former path. Up to 1932 this was the only cart road up to Skjeggedal. All transport for the reservoir construction had to come on the cableway and along this road.