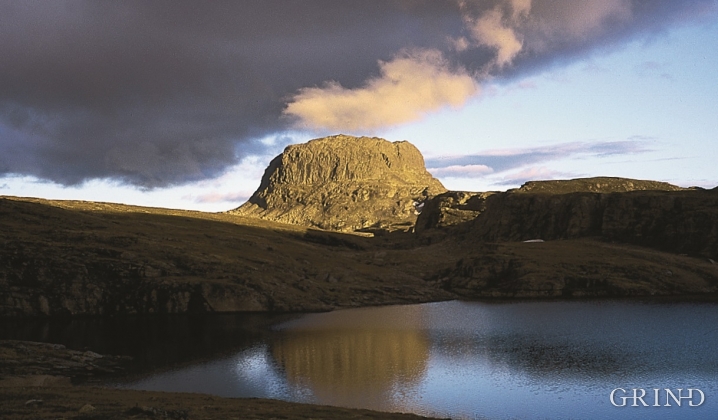 FROM THE FJORD TO THE MOUNTAINS

Hårteigen, «the grey signpost», as the name suggests, is a landmark for mountain hikers on the western plateau. The piece of mountain is also a monument for the mighty rock layers that once covered the entire plateau.

Together with Hardangerjøkulen and Hallingskarvet, among others Hårteigen is a remnant of a thrust sheet made of gneiss. Otherwise on the plateau the thrust sheet has mostly been eroded away - what is now gone has been washed out into the North Sea by rivers and glaciers.

Under the thrust sheet bedrock there is phyllite from Cambro-Silurian times, and this rests on the Precambrian basement. The phyllite emerges into view around the foot of the mountain. It contains a calcareous-rich layer, with fossils of animals that lived about 470-464 million years ago. Both trilobites and graptolites are found at Grytenuten, near Hårteigen. These animals lived on the clay bottom of an ancient sea. After they died, they became buried by a thick layer of silt and clay - that preserved the forms of the animals.

The gneisses in the thrust sheet make up most of Hårteigen itself. The sheets were shoved into place when Greenland and Norway collided. Large rock flakes of gneiss were squeezed away from the collision zone and over the clay where the fossils lay. It is quite amazing that these dramatic forces, which moved several kilometre-thick slabs of rock, did not destroy the fossils!

The flakes came from the northwest. It is believed that by the time they stopped, they had travelled several hundred kilometres. Geologists think that the journey began in the marine area to the west of Sogn and Fjordane or Sunnøre, but the exact position is impossible to guess.