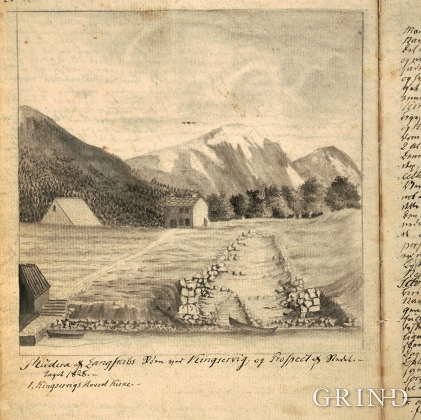 Nils Hertzberg’s prospectus from 1825 of “Ålmerket” and the site of the long ship shed. (owner: Manuskriptsamlingen, Universitetsbiblioteket i Bergen (188a)).

Kinsarvik has probably been a centre for the inner Hardanger districts back in prehistory. History tells us that in medieval times there was a marketing place, a “kaupang”, here; a connecting point in the communications between east and west. There were supposedly around 300 residents here but the place was likely wiped out in a great fire.

There are naturally a certain amount of scepticism linked to such stories, but through archaeological excavations finds have been made of objects from the Middle Ages; nails, boat bolts, steatite vessels, weavers’ weights, knife shafts and everyday ceramic vessels, especially from the 1300s and 1400s. There is therefore ample evidence that there has been a settlement here. “Fjordungstinget” –one of four peoples’ assemblies in each county in medieval times – was held in Kinsarvik up to 1650, and in the Middle Ages St.Olav’s assembly gathered here. When Borgstova (the Borg house) was moved to the site of the St. Olav’s assembly, which was excavated in 1957, it became evident that this also had a foundation of subterranean walls from the Middle Ages. “Ålmerket”, the commons ground by the church, may have been more than just a market place. History also relates the story about the army ship HardinggeitiI, which was laid up in the long ship shed in Kinsarvik. The site of the shed, Skiparstod, is clearly marked in the terrain today at the ferry road. Sail and mast for the army ship had to be stored in a dry place. The opening in the plaster wall uppermost in the church gable of Hertzberg’s prospectus probably shows that the sail and mast of Hardinggeiti were stored in the church loft.

Skiparstod is 33 x 13 metres large, and this shed has had room for two long ships. How the building itself may have looked is unknown, but it has probably been a building made of pole walls with a roof across, as we see traces of in the long ship shed at Stend in Fana, or Bjelland on Stord.