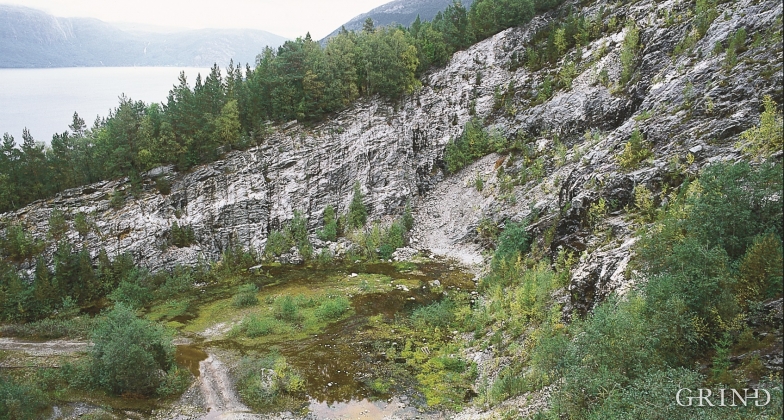 The quartz quarry in the mountainside above Kvalvikane - once the source of raw materials for the melting furnaces in Ålvik. Activity in the quarry ceased around 1960. (Svein Nord)

In Ålvik quartz has long been used to produce ferro-silicon. The quartz was collected from the other side of the fjord, from the mountainside above Kvalvikane.

Ullensvang has quartzite in enormous amounts. The rocktype, a transformed sandstone, belongs to the so-called Ullensvang Group, and is perhaps as much as one and a half billion years old. Despite its age, it has visible structures from the time the sand was deposited by rivers and lakes in an ancient volcanic landscape. However, the original quartzite is not pure enough for the ferro-silicate industry: mica, feldspar and other minerals got mixed in with the quartz grains in the ancient river. But, in more recent geological periods, some of the quartz was dissolved and deposited as veins in the bedrock. This pure, white vein-quartz is seen, among other places, in the mountainside above Kvalvikane. Ålvik inhabitants came here to collect quartz for their melting furnaces. The old access road from Indre Kvalvikane up to the mountains is completely white from the small quartz stones from the quarry further up. Today, the requirements for purity are too strict for the quartz from this area to be used, but perhaps there is purer quartz from an area that has yet to be discovered?

This quartzite from the road-cuts between Velure and Aga show so-called oblique layers. During deposition, some layers were deposited horizontally, others obliquely (oblique layers). Such layering can also be found in river deposits in Hordaland today. Sure enough, the billion-and-a-half-year-old bedrock has been twisted and turned, but not more than that a geologist still can interpret which direction was up when they were formed. (Haakon Fossen)