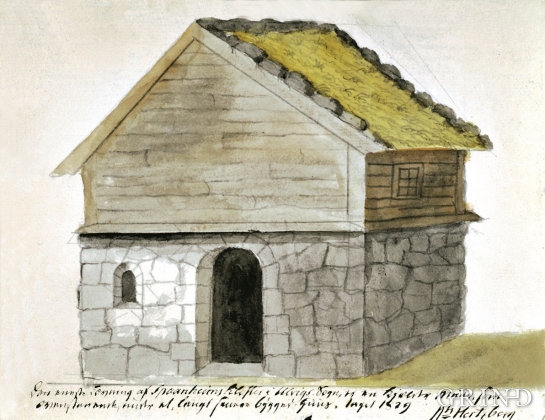 When bishop Neumann visited Ulvik and Spånheim in 1825, the old cellar walls were still standing, with arched windows framed by steatite; probably stemming from the walls beneath a similar grand house such as “Lagmannsstova” at Aga. It is not an unlikely theory. In the 1200s and 1300s a great family had their seat at Spånheim. Håkon Håkonsson’s saga tells about Ogmund at Spånheim, who made a famous “Jorsalferd” (pilgrimage to Jerusalem) around 1218. Peter at Spånheim, who is first mentioned in 1293, is probably the same Peter who became a knight in 1301. Peter’s sons attained important positions. The knight Bård PEterson even became a chancellor with Håkon Magnusson.

Through the ages stories have evolved that the old walls at Spånheim were remains of a monastery. Moreover, what has kept this story alive is a gravestone found in the old Ulvik church. The gravestone depicts a veiled woman kneeling. In one hand she holds a book, the other she points to the sky. The inscription says that here rests Sigrid Reidarsdotter. She may have been a nun, but hardly an abbess in an old Spånheim monastery.