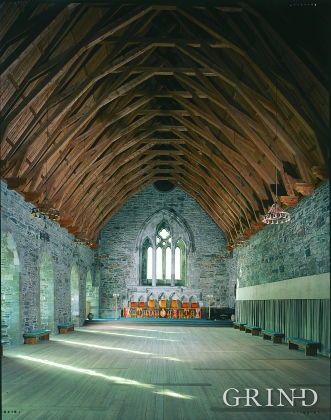 In 1266 “brann hallin i Biorgyn” (the hall in Biorgyn burned down) the Icelandic annals recount. The building we call Håkonshallen must be one of the “two good stone halls” built on the initiative of king Håkon Håkonsson, identical to the “stone hall” in which the most prominent male guests sat during the wedding and crowning celebrations of the successor to the throne, Magnus, in September 1261. At the crowning of the Håkon himself a long boatshed had to serve as venue. The hall is built on the pattern of European imperial halls, while the details point to English models. Håkon had close contacts with king Edward, who had recently built Westminster Hall.

When the nation’s government was moved eastwards in the 1300s, the king’s estate and the hall lapsed into decay. It was the painter J.C. Dahl who rediscovered the hall. In the restoration that was started in 1880, the characteristic stepped gables were restored to the building. These are depicted on the Scholeus engraving from the 1580s. In 1906-16 the banqueting hall was richly decorated by the painter Gerhard Munthe. Munthe’s decoration and all the interior installations were however obliterated on 20 April 1944, when a German ammunition ship exploded at the fortification harbour. But the walls were standing and a newly restored king’s hall was opened by king Olav V at the 700 year jubilee in 1961.