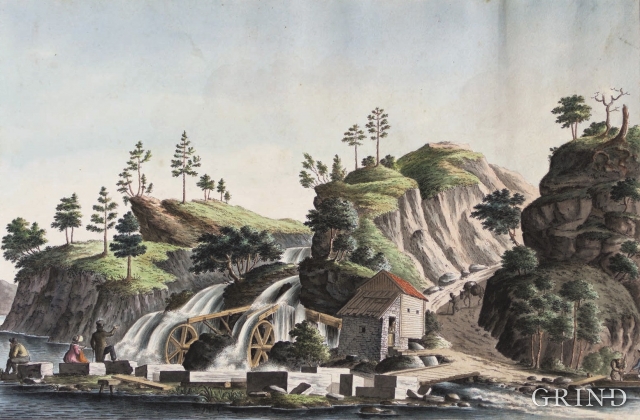 When Christiansborg castle was to be built in the middle 1700s, marble was transported from Bergen to Copenhagen. Some of the marble that was shipped to Denmark was taken out from an island in Nordåsvatnet, with the fitting name Marmorøyen ("Marble Island").

On Marmor Island the bedrock reaches a thickness of around 50 metres, which is enough to provide a foundation for a quarry. On the island's east side one can still see the remains of the quarry, while the two marble sawmills by Hopsfossen are completely gone. The activity lasted from the beginning of the 1700s until around 1850, when the best marble was taken out.

The marble in Fana is altered limestone, probably of the same type as that we find in Sunnhordland, and in Os and Samnanger. Definite fossils are not documented, however; the alteration process has been too intense But, as in Os and the Gullbotnen area, the marble occurs together with a green conglomerate. Since the Os-marble is of Cambro-Silurian age, it is likely that the marble in Fana also stems from this period.

Marble is a rarity in the Bergen area. The rock type is found in a narrow field from Storeveit Church to Fana High School and further on to Hopsneset and Marmor Island. In the Stave Church at Storetveit, there are fine channels and small holes in the marble.

Map of the marble occurrences by Lake Nordåsvatnet. (Haakon Fossen)