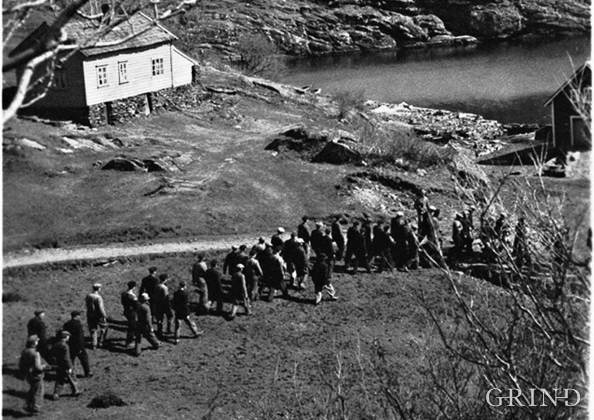 Tælavåg has a significant place in the history of the German occupation in WWII. The small community by the sea, where for centuries people had made a living from farming and fishing in harmony with the natural resources, in 1942 became the victim of German reprisals without their equal in Norwegian war history.
The collection of war histories in Tælavåg provides us with a close-up of the dramatic events.

From early times Tælavåg became an important vantage point for the illegal traffic westwards. In April 1943 two agents from Kompani Linge (a resistance movement) were lying under cover at Telavåg. At this time Gestapo were watching the community in collaboration with Norwegian NS-people. In the grey light of morning on 26 April Gestapo surrounded, and forced their entry into the house where they found the two agents. Shots were fired and Hauptsturmführer Johann Behrens and his next in command were killed.

This provoked reprisals. Reichskommizär Terboven himself came to Tælavåg to ensure that the community was annihilated. On 30 April all the houses in the community were blown up in front of all the inhabitants. Subsequently all adult, able-bodied men, seventy-two in all, were sent to Bergen and further on to the concentration camp of Sachsenhausen in Germany. Thirty-one of them never returned. Women, children and old people were interned at Storetveit school before being sent to Framnes People’s High School in Kvam. Here they lived for two years.

When people returned in the spring of 1945 Tælavåg lay in ruins. Four years later the community was rebuilt with support from The War Damage Social Security, The National Help and The Norwegian National Housing Bank as well as from voluntary donations. Later on damages were released from Germany.

"WARNING: Any association with the enemies of Germany will be punished by death". (from: Haga, A. (1979) Natt på norskekysten. Oslo, Cappelen.).

The traffic to England

The traffic to England started just after the occupation of Norway. In May 1940 around 30 boats went westwards from the Norwegian coast. Altogether there were around 3000 people on around 300 civil vessels who managed to escape across the North Sea during the War; most of them from West Norway. The traffic to England is closely connected with the resistance movement. The pioneers were amateurs and idealists with a great ability to act, but who lacked experience.

The illegal traffic provided people and material for the establishment of professional Norwegian resistance units, such as Kompani Linge and “Shetlandsgjengen” (the Shetland group). Gradually the England traffic became more and more a way of an escape route for resistance people and others who were pursued by Gestapo. This became particularly evident in the autumn of 1941 with extensive revelations of resistance groups in Bergen and Ålesund. Gradually Gestapo tightened the net around key organisations and the traffic to England became more and more risky. This led to a lot of drama and many dramatic sacrifices in the coastal areas. That the reprisals in Tælevåg were directed towards civilian, innocent people also helps to illustrate the fact that the traffic to England was an expression of civil, general resistance to a much greater extent than military activity. With the activities in Tælavåg an important period in the Norwegian resistance movement is over. The time of the amateurs within the resistance movement was a thing of the past, and military units and organisations took over.

The main part of the North Sea Traffic took place on the west Norwegian coast. Bremnes on Bømlo was a particularly important centre, with an effective organisation that was late in being revealed.