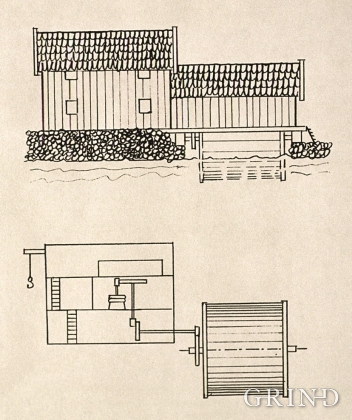 The mill that belonged to Johan Steinegger in Kvalvågen in Lindås, an attempt to exploit the difference in tides. The drawing is based on a fire insurance assessment from 1855.

The farm Kvalvågen is mentioned early in written sources. In a letter from 1528 it is written as Hvalswogh. The name is obviously alluding to “whales coming into the bay (våg)” in older times. According to records, the houses at Kvalvåg were built by Danckert Heiberg (1735-1795). He came to the farm and introduced the name Toftegård. Heiberg owned many farms, amongst them Fedje and Kilstraumen. He sold these to Christopher Kahrs in 1799. Kahrs settled at Toftegård and rented out the other farms. In 1838 his son, Christ Kahrs started trading in Kvalvågen, but sources have it that Kvalvågen is one of the oldest trading posts in Nordhordland.

At Toftegård there was also a coopering business. In the last part of 1800 a mill was built in Kvalvågstraumen, driven by the tidal waters. The mill was constructed from stone slabs taken from the slate-covered road leading to the sea. There are still remnants of the mill, but little is left of the settlement of Toftegård. In the 1830s there were a housemistress and a resident teacher at Toftegård; three housemaids and three farm boys as well as six crofters had regular duties on the farm. On the north side of the farm there was a carp dam, and by the sea, a fish dam; thus fresh fish was always ensured. Every spring and autumn the local court assembled here, headed by the district recorder for Nordhordland.

In the avenue from the main house down to the quay various types of trees were planted, such as aspen, oak, rowan and birch. The residential house, a large one-storey white-painted building with dormer windows and a loft, was well situated with views both south and north. To the west of the house was the court house, a large building which also contained a trading stall, bakery, rough kitchen and servants’ quarters. On the east side was the so-called “Small house” a small one-storey building that was used as office by the secretaries of the country policeman and the district recorder during the court meetings.