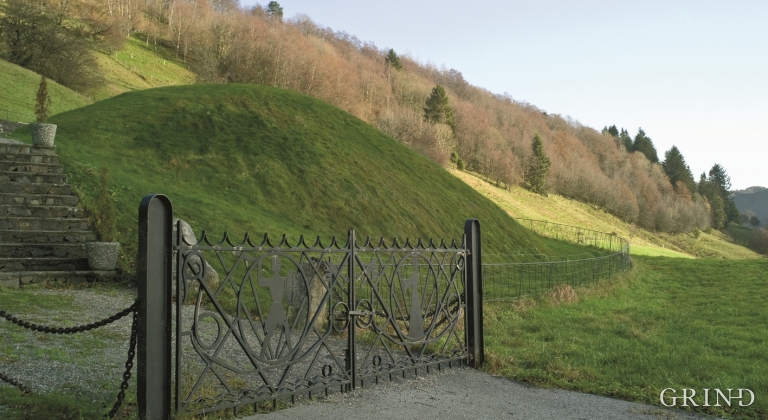 Sæheim (Seim) at Lygrefjord is mentioned as one of the royal farms of Harald Hårfagre. Several of the first Norwegian national kings had their seat here, and the farm became Crown Property up to the 1400s. According to the sagas, Håkon den gode is buried on the farm.

Three Norse sources give an account the burial of Håkon the Good who was wounded in the battle at Fitjar in 961. According to legend he died on Håkonshella. Fagrskinna, Ågrip and Heimskringla say he was buried at Seim in Nordhordland. Local tradition links the grave to “Kongshaugen” (the royal mound) southeast of the church.

The mound was heavily damaged and levelled to the ground at the beginning of the1800s. Twice the mound has been examined by archaeologists, in 1879 and 1958. At the excavation in 1958 they found remains of the old rim of the mound and could ascertain that the mound originally must have been around 20m across. Traces of a bier or a coffin base were found. But remains of the king himself or his sword “Kvernbit”, which, legend tells us, is supposed to have accompanied him in the grave, was not found. Thus we have no hard evidence, other than legend, that it was Håkon the Good who was buried in this mound.

The royal mound at Seim was rebuilt for the 1000-year celebration in 1961.

The royal farm at Seim

The royal farm became a noble estate in the 1500s under Erik Rosenkrantz, and later on it became a farm property. The antiquary Nicolay Nicolaysen wrote in 1890 about an old house on this farm, pulled down around 1870. Above the door there was a carving saying: “Lars Amundssøn 1635”. The local historian Johan Litleskare thinks that this house may have belonged to a larger multi-room house with bed-loft, food-shed, dwelling house, rough kitchen and store-room built in a row; a structure approaching 27m. Traditionally there would be a loft above all the rooms in the house. There was not a smokehouse in the Seim structure, as there was on the neighbouring farms. On some of the beds in the bed-loft, there was decoration and names carved in relief.

This is strikingly reminiscent of the renaissance décor in “Fjellskålnesloftet”, which today is placed at Osterøy museum. The loft, built in 1556, was moved from Seim to Fjellskålnes on Osterøy in 1687, through an inheritance settlement. Around 1890 it was bought by The Society for the Preservation of Norwegian Ancient Monuments and stored in the garden at Bergen Museum, where it was erected at one time. In 1948 it was finally re-erected in the museum grounds of Gjerstad Fornminnelag on Osterøy. The renaissance loft at Seim thus gives us a close-up of way of life and crafts on a grand farm in Nordhordland in the 1600s.