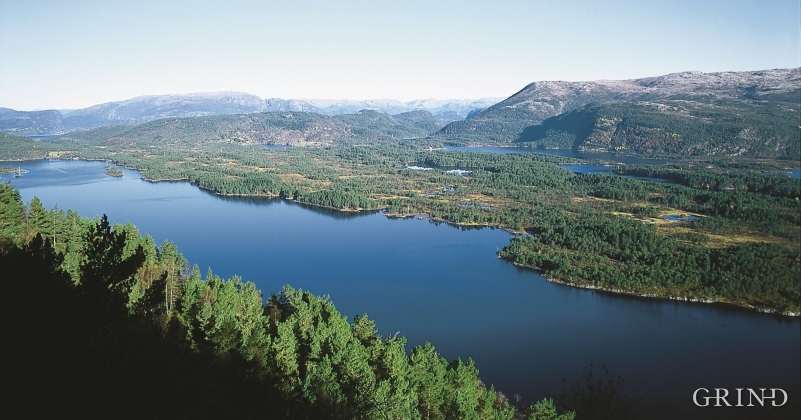 BOG PRESERVE IN A CLASS OF ITS OWN

Herlandsnesjane, a four-kilometre long peninsula in Lake Storavatnet in the middle of Osterøy, is well known among botanists. Here lies an unusually large and diverse bog.

Despite the moist climate most of the bogs in Hordaland are small. This is because of the uneven terrain in western Norway which causes the water to run off quickly. But, on Herlandsnesjane, the flat landscape has given good conditions for the growth of bogs. A pine forest grows here also, along the outer edge of the bogs. This alternation between forest and vast expanses of bog distinguishes this landscape.

The wettest portion lies along the edge of the tarns and the many small ponds, that decrease in size as they gradually get overgrown with peat. Slowly but surely, this overgrowth will sometime in the future result in the total disappearance of the small tarns that today are important for a number of plants and animals.

The bog vegetation is varied, according to how much nutrient the peat contains. Parts of the bogs get most of their nutrients from rainwater - the peat is then acidic and lacking in important minerals. Such peat is visible mostly as high tufts. Other places, the peat receives an abundance of nutrients from the groundwater. Here, this gives good growth conditions for several demanding species, such as broad-leaved cottongrass and flea sedge. Bog asphodel always grows in places where the peat is solid. For those who want to walk out on the bogs without the risk of being left standing with half of your boot covered in mire, it can be wise to follow the bog asphodel.

A long list of common bog plants are to be found on Herlandsnesjane. There are most of those that prefer to grow in coastal areas, such as bayberry, bog asphodel and cross-leaved heath. Livid sedge and moor rush are among the rare bog plants that are found here.

Easterners in the west E

Even though one does not see many birds in the unproductive nature around the bogs, the species richness is nonetheless large, with several bird species that normally live in the eastern part of the country. For example, several pairs of Mistle Thrush (picture) nest on Herlandsnesjane, a rare nesting bird otherwise in Hordaland. Other typical Eastern birds, such as the Green Sandpiper and Wood Sandpiper, have been observed on several occasions. Also several species of dragonfly and spider that are seldom seen in western Norway are found here. The most startling of these is the jumping spider , Lasaeola tristis, a warm-loving eastern species.

Neither is the dwarf mountain pine a typical western species. This half-metre high bush is most widespread in the eastern and northern parts of the country. In Hordaland it is rare to see the dwarf mountain pine in such abundance as here on Herlandsnesjane. In the lowland it thrives best on bogs, as long as the peat is not too wet. In the high mountains, also, it grows on dry ground. The boundary appearing to come from soil requirements may come partly from the light conditions. In the lowlands this species is often shaded out by the forest, while there is enough light on the large expanses of bog. Dwarf mountain pine is nonetheless totally absent from the coastal mountains, but it is widespread in the mountains of Stord and on Hardangervidda. Just why its distribution is to uneven in the county, no one has yet been able to explain.

There are many different species of spider on Herlandsnesjane; the raft spider (picture) is the biggest. With its light stripe it is easy to recognize. (Jan Rabben)