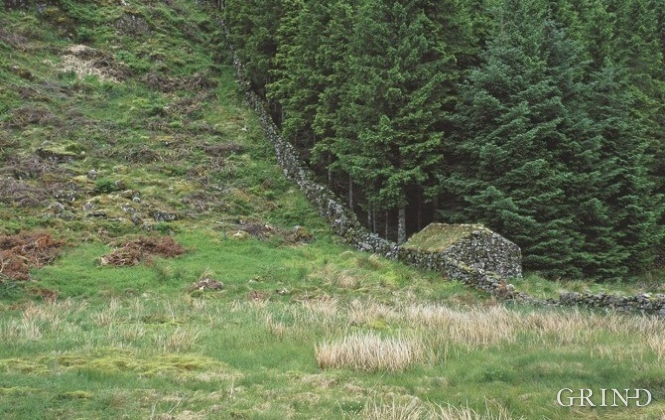 The cowshed at Kolåseidet (Svein Nord).

The little cowshed which lies on the fence at Kolåseidet, constructed in connection with the stone fence, has put its mark on the cultural landscape. On the border between the home fields and the forest, the cowshed is the very symbol of a simple resource management - the division between the cropland and the grazing grounds. And the way it was built has its roots far back in time.

The cowsheds stand empty today. It is many years since the cattle from the grazing grounds were milked in the evenings at the fence, or the sheep were allowed into the shed. Today’s agriculture based on grain feed has made the cowshed superfluous. In this way these simple stone buildings are an expression of a system of resource management which has been a feature of all the generations which have gone before us. In our days we no longer need to depend on the meagre grazing grounds which kept the animals - and the people - alive.

The cowsheds of Nordhordland are built in grey stone; many are built in stone together with the fence, that is to say that the stonewall of the cowshed and the stone wall of the house are built together. The building method has roots back into prehistoric times, many of the stonewalls which led the cattle from the grazing grounds into the cowshed were built in this way. We know that stone walling flourished in Nordhordland at the end of the 18th century, encouraged by the knowledgeable members of the Useful Society, but the stone building tradition was much older

The old road to Manger runs along the slope behind the cowshed; made up as a footpath the two-three kilometres to Li. This stretch of road is part of the road from Alverstraumen to Manger. The road was probably built around the middle of the 19th  century for the transport of post before Manger became a stopping point for the steamships around 1880. The road also links the three ecclesiastical parishes of Manger, Sæbø and Hordabø.

The old road signs along the road tell who was responsible for the maintenance of that stretch of road. The duty to maintain the road was assigned to the farms along the road, and the extent of the work was estimated according to the size of the property. It was the district police officer who saw to it that the work was carried out.

The planting of forest in Radøy began already at the end of the 1800s, but the majority of trees were planted from the middle of the 1950s until the middle of the 1970s. In 1957 alone, a whole 428 000 trees were planted in this municipality. The motivation was a desire to increase the property values and to make the open landscape more beautiful and better protected.

Similar to the rest of the west coast, Radøy was entirely covered with forest for several thousands of years. Forests of pine, oak and other leafy types lend their character to the landscape. The forests gradually disappeared through cutting and burning as the farmers cleared more land. Burning off of the heather and grazing farm animals hindered the new growth of trees. Over a long period of time, people preserved the extensive heather moors and grassy fields in this way, a characteristic landscape that still exists today out on Radøy. With the changes in farming at the end of the 1800s, came a decrease in the need for the outlying pastures. In the part of the outback that wasn't transformed into growing land, planting of trees was considered a rational and economical use of the land.

It was the farmers on Askeland who in the 1880s planted the first trees in the grounds of the big planted forests on Radøy. They planted pine, and many of these trees are still standing. For the most part it was dwarf mountain pine and mountain pine that were planted in the beginning, often on islands and smaller islets. On the nutrient poor ground and where it was very windy, these tree types did very well.

The first trees of common spruce on Radøy were planted in Nordanger in about the year 1900. Today, this tree species colours the landscape many places on Radøy. Even so, another species of spruce surpassed it in extent and growth: the Sitka spruce, with its pointy, prickly, bluish needles was first planted at Grindheim on Radøy in 1932. This tree, which originally comes from the northwest coast of North America, is highly productive and of good quality. Throughout the 1960s, the Sitka spruce was prioritized by the forest-growers on Radøy. The tree spreads naturally today on many parts of the island. Other tree types that also planted on the island include ash, lark, white spruce, beech and several types of silver fir.

The hand of man has been involved in the planting of nearly all of the conifer trees on Radøy. Hardly any municipality in western Norway has as much planted forest in relation to total area. About 10%. of Radøy was planted during the period from 1950 to 1970. Forester Ole Kolås was a central driving force in these afforestation efforts. Over a period of thirty years he organized the planting of over three million forest plants. At the turn of the century, planted forest covered over 20 km2, which is about 20 % of the land area in the municipality. From the north to the south of Radøy, one finds several large continuous belts of forest. The biggest and longest is found by Villanger-Risnes in the north and stretches all the way south to Lørvik-Kjeset.

With all the forest and tree planting, the red deer have also found good places to live on the island. Red deer established a permanent residence around 1960. First in 1973, the authorities permitted deer hunting in the municipality, and during the first season, ten animals were hunted. 27 years later, in the year 2000, around 200 red deer were hunted.

We know also that a forest of dense conifers leaves much less room for other species of plants and animals than does a natural forest. Many regard a planted forest as a foreign element on the old west Norwegian cultural landscape. Fortunately, consideration of the landscape, recreational life and cultural heritage has a greater place in forest management now than before. The human labour that planted the forests on Radøy, must also tend to the results of its efforts, now that the forest has gone from a growth to a harvesting stage.