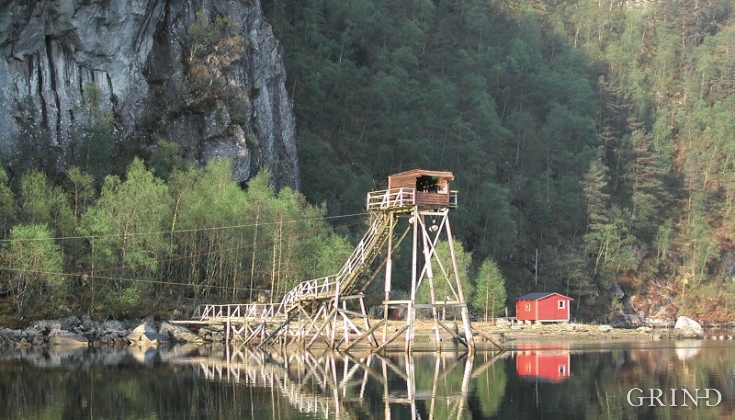 Just after 1900 the fixed seines stood crowded together around the entire Osterøyi and into the streams. It was a busy time with buyers and inspectors. (Ola Kvamme).

THE SALMON SCAFFOLDING AND THE FIXED SEINES

From times immemorial salmon and trout have been caught with various tools in the fjord and the streams here. Finds in the Stone Age settlements at Skipshelleren indicate that salmon was probably caught by angling. Nets, fish pots and traps have been used in the rivers right up to our times. In the fjords the use of nets was developed into a salmon seine around 1500, and later into what today is known as fixed seine.

The fixed seines and the high scaffolding by the fjord is a fishing technique that has developed in the fishing of sea salmon in the fjord settlements in West Norway. “Sitjenota” – a seine bag open at one end – sits in the fjord immediately below the scaffolding with a guiding seine into the bag. To make the “sitjenota” stable in the current it is fixed with wires to land and with stones to the bottom. The fishermen sit in a little hut at the top of the scaffolding, high above the sea. When they see that the salmon has entered the seine they close the bag with a pulley mechanism. At Straumshovet it is easy to stay at the edge and watch when the salmon travels up the current. Formerly there was only a simple bench to sit on. The first scaffolding was erected at the end of the 1800s.

Salmon fishing had a great boom in the years after 1870, when the market value of salmon and trout increased. This caused a great pressure on resources, which led to legal limits of the fishing season and the regulation of the use of tools. Salmon fishing provided good income for the landowners. It was an interesting form of fishing with relatively low investments. In addition, there was great excitement connected with the fishing and hope of the “great pull” and getting the seine full of silver-glimmering fish.

Straume (the current) has been the very basis for settlement, industry and communication from early times. More than 6,000 years ago the hunters arrived – the salmon-fishers and the deer hunters – and found a living below Sipshelleren.

The farms have been placed on large terraces of gravel and sand left from the Ice Age, built up by the strong current here where the Bolstad fjord is at its narrowest. The sand has provided income and places of work, an industry that has set its mark on the landscape. The large scaffoldings convey a different activity: salmon fishing.The Bolstad fjord was the traffic artery for the Voss settlements long before the arrival of the roads and the bridges. But as the road the sea route was neither free of danger, and Dragerbryggja was built to harness the strong natural forces in the current.

The landscape museum – an “eco museum” – shows how the forces of Nature and natural resources have been basic to life and settlement through many thousand years. Kallestadbua (the Kallestad house), Stavmausta (the frame-built boathouses) and Skulemuseet (the school museum) provide a close-up of daily life and building traditions in later centuries.