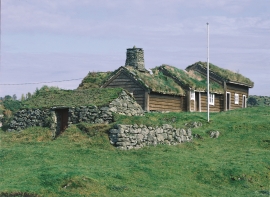 In the lightly undulating landscape at Boga there lies an old house with several rooms on a small rise. In fact it looks like three houses built into one another; a scullery, a living room and a store with a loft. From other sources we know that this house had covered passageways and sheds round all the walls in the 19th century; a compressed “long house” with inter-connections between all the rooms. This is a building style from the Middle Ages that we see traces of; a building corresponding to those we have seen remains of at Høybøen in Fjell and Lurekalven in Lindås. Bogatunet was restored in 2006.