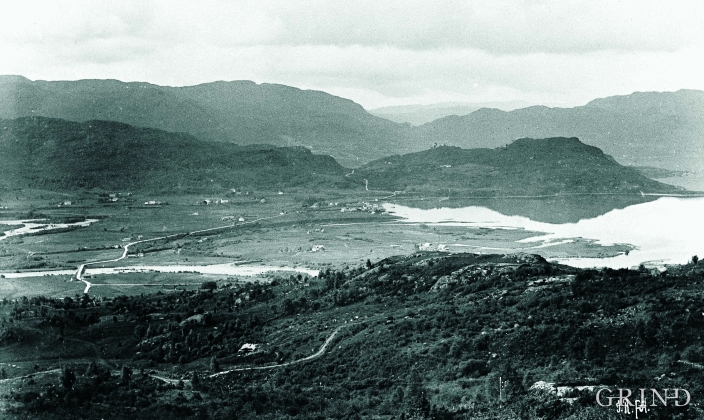 Etne and the Etne delta around 1900, when the delta had a much more natural appearance than it does today. (Etne Municipality)

FROM MAGNIFICENT BIOTOPE TO INDUSTRIAL SITE

During the latter half of the 1900s the big natural river deltas on Westland disappeared. Until the 1980s there was still a small, but significant remnant of the original river delta from the Etneelva river, but today most of this, too, is industrial land.

Where bigger rivers meet the sea and form sand banks, there is always a high level of biological activity. The rivers are a constant source of rich nutrients and sediments. By the river mouth there are usually many different forms of life waiting to exploit this runoff. Animals and plants that thrive here are adapted for an environment in which the salinity, temperature, tidal waters and currents in the river are constantly changing.

This zone of outflow, which is also called an estuary, Characteristically introduces great challenges both with respect to the seasons and the changing tides. The whole time there are life forms that die off because they cannot keep up with the fluctuating conditions. These organisms then become nourishment for others. Nature responds by increasing production, such that the number of smaller fish, mussels and other small crustaceans can become exceptionally large. This in turn leads to a high diversity of animal species, and most estuaries also have an unusually rich bird life.

But, the delta sands, which are both flat and nutrient-rich, are well suited also for agriculture. This is how it came to be that the first strips of field were cultivated. Later, these were the preferred areas for settlement. With settlement, followed flood-control and obstructions in the river, mass removal, and often, changes in the usage aimed at meeting the goals of business and industry, since construction costs invariably were low in such areas.

This is how the land was developed in Bolstadøyri, where the Vosso runs out. And this is how things developed also in Eidfjord, Odda and Eikelandsosen, and similarly, on the delta flats in Sogn and Fjordane. The delta in the Etneelva river met with the same fate. But, parts of the sand flat here are still biologically quite rich. On the north side of Etne river mouth, there is a little, undisturbed area that is an important rest stop for wading birds under migration, and for the over-wintering ducks, kittiwakes and grey herons, who all find food in the ice-free river mouth.

A delta is created

The Ancient Greeks called the area where a river meets a water body or the sea, "delta", after the shape of the letter ∆ (delta). The junction often forms a triangular shape from the deposition of large amounts of sediment. Where the current becomes less strong at the river mouth, its ability to transport sediment decreases, and the sediment settles out into the fjord in the form of a delta.

The finest particles (clay and silt) remain suspended longest and settle slowly to the bottom further out. Nearer land, within the bottom layer, the sand and silt grains roll around along the river bottom until they reach the delta slope and there they get deposited as a sloping layer: the "foreset bed". The largest particles that the river transports get deposited as a flat top layer (“topset bed”) in the gravel- and stone banks outermost in the delta, usually where the river branches. When the delta builds further out in the fjord, the layers will eventually be deposited on top of each other, with the bottommost layer lowest (the “bottomset bed”), then the sloping layer(foreset bed) and the top layer (topset bed) above these. Subsequent uplift of the land, such as we have experienced in Norway after the last Ice Age, can result in these old delta deposits being exposed on dry land, with their bottom, foreset and topset beds clearly visible.

The dried up river delta in the terrace at Austreim, three kilometres east of Etne centre. About 12 000 years ago the delta was laid down in the fjord, but the uplift after the ice melt lifted it 70-80 metres above sea level. In the large gravel pit we can study the stratification in a delta such as this with its horizontal top layer (topset bed) over the diagonal layers. Nearby, down by the river, we can also see the old bottom layer (bottomset beds). (Inge Aarseth)