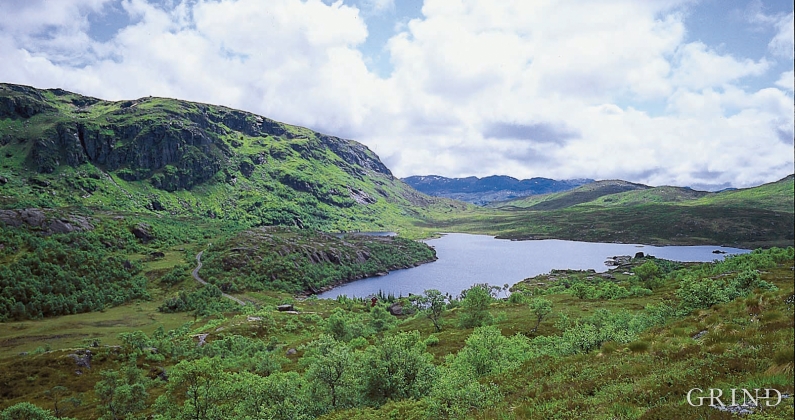 The pitch of the landscape southwards along Krokavatnet and Bjørndalsvida in the Etne mountains follows the Etne fault zone. (Svein Nord)

On Sunday the 29th of January, 1989, at 17:38 o'clock, Etna shook. The earthquake, with its epicentre ca. 9 kilometres south of Etne centre, had a strength of 4.2 on the Richters scale. This could be felt over large parts of West Land, especially in the areas around Åkra, Etne, Hardanger Fjord and Sauda Fjord. The earthquake was the largest that has ever been measured in Hordaland.

The earthquake in Etne did only minor damage. Faults appeared in the earth on a slope along the northerly part of Etne Fjord. The faults ran right through a house that was built into an incline. The building sank a couple of centimetres on the northerly side, and there were faults both in the foundation and in the cellar floor.

Norway lies in a quiet region compared with the earthquake zones that are associated with plate boundaries, such as in Turkey, Japan, California, Mexico and Chile. Nonetheless, Norway continually experiences small earthquakes, especially in the coastal areas. The coast lies on the boundary between the sea, where the earth's crust is sinking, and the mainland, which is still rising slowly after the ice melt around 11 000 years ago. The majority of the strongest earthquakes occur in Sunnhordland. These quakes seem to be triggered by movements along falut zones that run north-south, parallel with the coastline. The Etne-earthquake was triggered by just such a fault zone, 14 kilometres under the earth's surface. During the summer of 2000, West Land was hit by a larger earthquake that had its epicentre in Sunnhordland, and it is not likely that it will be the last.

Why do earthquakes occur?

The surface of the Earth is comprised of large continental plates, that are constantly moving. The plates move only a couple of centimetres per year. Over time, nonetheless, tension builds up in the bedrock, especially along the boundaries between two plates. When the bedrock can no longer tolerate the amount of tension that has accumulated, they break, and the energy that has accumulated is released in the form of an earthquake. The energy then spreads itself in all directions from the orgin (the earthquake's epicentre), in the form of different earthquake waves. These are the waves that are recorded on the earth's surface with the help of measuring instruments (seismographs).

The bedrock at the earthquake's epicentre becomes physically altered. In contrast to the elastic deformation which is transmitted through the earth's crust as seismic waves, the alteration at the epicentre occurs in the form of a fault, where the masses of bedrock move along a single plane (see figure). Movement along such fault planes can in rare cases reach the earth's surface, for example, in larger earthquakes, when the epicentre is shallow. Dependent on the direction of the displacement, the fault may be visible at the surface in the form of sinking, breaking or fracturing.

Fault- and fracture zones in the Etne area. The Etne earthquake in 1989 is believed to have been triggered by movements along the Etne fault zone at many kilometres depth. (Haakon Fossen)

Earthquakes registered in southern Scandinavia. The size of the quake is indicated according to the Richters scale. (Norwegian National Seismic Network)