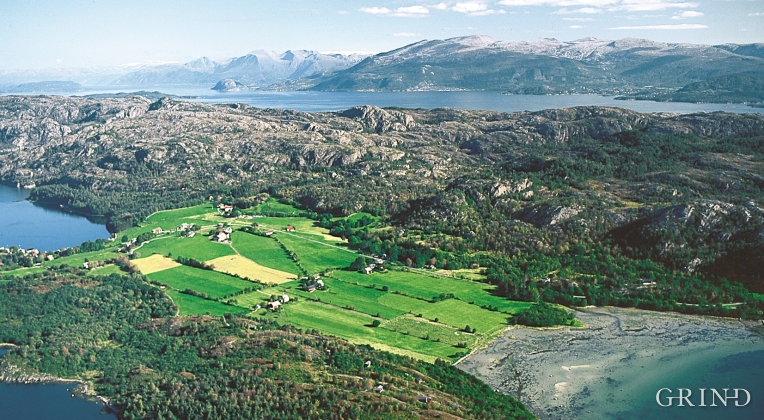 The majority of Huglo is bare rock. A bit of dwarf pine forest is the only vegetation able to put down roots. Along the west- and east sides, to the contrary, the landscape is unusually green and lush. The reason lies both in the bedrock and in the ice that covered the area 12 000 years ago.

The acidic, phosphate-poor quartz keratophyre that dominates in Huglo and Skorpo south in Tysnes, is one of the bedrock types in Hordaland that supplies least nutrients to the vegetation. The quartz keratophyre inland on Huglo is a metamorphic rock, rich in silica or silicic acid (SiO2). The marble beside the sea, however, is free of quartz and is the rock type that gives the most fertile and calcium-rich soil. Tveitvantet Lake, the largest on the island, can also thank the surrounding calcium-rich ground for the fact that its water has tolerated the acid rain and maintained a stable pH of over 8.

But, also the ice should take some of the honour for the good agricultural soil on the island. Had the glacier not decided to stop and shed nutrient-rich deposits on parts of the island 12000 years ago, Huglo would have been more barren. In north Huglo the glacier scoured up a bow-shaped moraine ridge by the ferry wharf in Huglavikjo. At that time the sea level at Nordhuglo was about 65 metres higher than today. Gravel and sand were deposited in front of the glacier, and clay was deposited further out. Today, we find the clay in the big cove that was given the name Leiro ("leire" is the Norwegian word for "clay"). This is the finest beach, and just above lies the best growing soil on the island.

At Sørhuglo the glacier reached down to the sea and scoured out a fine ridge, where the farms by Kumleneset are situated. The knob of land there must have gotten its name from all of the hamburger-shaped or rounded stones in the area. After the ice age the land rose, and waves and currents have sorted the loose sediment deposits. These have washed out rounded stones, while the fine-grained material settled out in the protected bays.

The loose deposits in the strand belt at Leiro, Huglo, were washed out of the big end moraine that was left after the ice stopped over Huglo about 12,000 years ago. Further up, on dry land, we find farms with rich growing fields. (Svein Nord)

On the northwest side of Huglo lies LEIRO as a wide clay alcove. The waters here are shallow quite far out, and at low tide large areas become exposed to the air. In the tidal transition zone a lot of marine eelgrass grows, one of the rarest plants in the whole country. This is also its most northerly occurrence in the world. Marine eelgrass thrives on shallow clayey beaches and does not usually grow deeper than 20 centimetres as measured from the normal high tide mark.

Since marine eelgrass was discovered by Jens Holmboe on Huglo in 1922, this species has been found at a total of seven localities in western Norway: three in Stord, two in Kvinnherad, one in Strandebarm and one at Bømlo. Today, marine eelgrass has disappeared from several of these localities. It is still found only on Stord. In order to find out more about this vulnerable plant's place in nature it is crucial that the few occurrences that are left not be disturbed by technological developments or other changes in its environment. (Bjørn Moe)