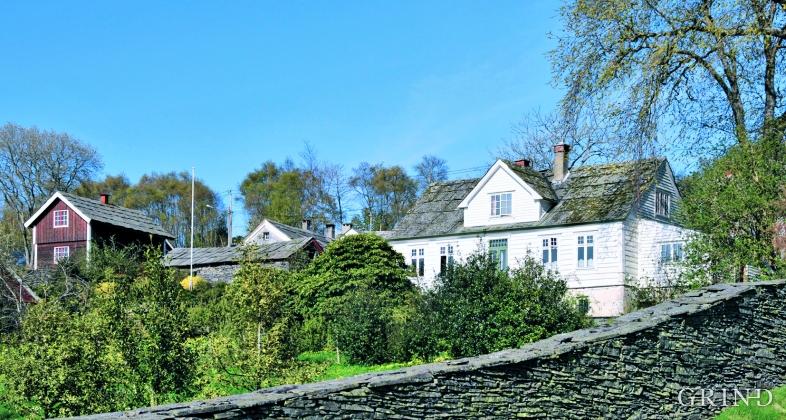 The main dwelling house at Einstapevoll. The only wooden building on the farm. (Jan Rabben)

Einstapevoll (from einstape: “bregne” (fern)) lies on the west side of the Tittelsnes peninsula. Up to 1831 the farm was a vicarage belonging to Stord parish. The priests had leasing rights. Land rent and other fees from the farm was part of their salaries.

I 1816 Ole Georg Olsen leased property no. 1 from the farm. He was the son of the parish priest Eric Olsen at Stord. He pulled down the old buildings and erected in all 24 new buildings on the farm. Of these only the main dwelling house was built of wood, the rest were in stone. Around the house he constructed walls of natural stone that form a boundary against the uncultivated outer fields, and fence in the garden.

The design of the garden is part of a conscious plan with distinct axes that reflect the symmetrical principles of the baroque period. The use of stone and the numerous roofs of slate, make the farm integrate well into the surroundings. At Einstapevoll there were several slate quarries that provided good income.
Ole Georg Olsen was a skilful farmer and craftsman, and he made the farm into a model farm. The ideas for the design of his farm were ideas he encountered on his travels, and it is evident that he must have been well versed in the principles for the design of gardens. He built greenhouses, planted roses and honeysuckle, planted orchards of fruit and berries and a row of mighty sycamore trees. Beyond these there is an elliptically shaped mound, the crown of an enormous chestnut tree. Today there are 18 houses left on the farm. The farm is beautifully situated in the landscape with its many stone buildings and walls. The main dwelling house, which was of wood, was originally built in the Empire style. Some of this style is still evident in interior and details. Externally the house is characterised by a reconstruction in 1916-17, with cross-post windows in the Art Noveau style. The living quarters for the retired “Muren” (The Wall), was probably erected in 1832. It has a side-wing from 1940. The farmstead was preserved by law in 1923.