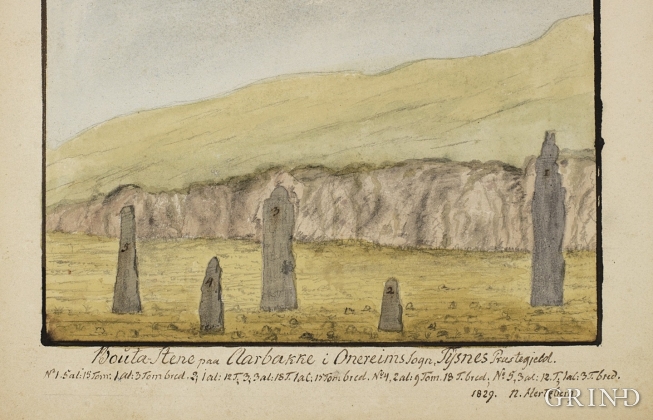 Nils Hertzber’s watercolour from 1829 gives us an impression of the burial site with the menhirs at Årbakkesanden. (owner Manuskriptsamlingen, Universitetsbiblioteket i Bergen (188a)).

The prehistoric site at Årbakkasanden with menhirs and burial mounds has been visited, described and illustrated by many learned researchers through the last 350 years. All the same, we still know very little of this unique cultural monument.

The oldest reference we have is from 1626 and is found in a manuscript “Antiqvitates” and “old Monuments” in Bergen diocese, perhaps penned by bishop NIELS Paasche. A drawing, that appears to be pure imagination, is reproduced by Ole Worm in his large work on Danish prehistoric relics, Danicorum Monumentorum libri sex from 1643.

Somewhat better, but far from accurate are drawings and sketches from the 1820s by W.F.K. Christie and N.Hertzberg.

The manuscript from 1626 mentions 6 menhirs and 6 stone mounds. People thought they were monuments from fights dating back to the time when Årbakkesanden was the venue for fighting. The combatants took up positions each on a mound and threw stones at each other until one of them was knocked out. Above the loser a stone was erected that should have the same height as the fallen fighter. The highest stone mentioned in the manuscript from 1626 was 5 ½ Zealand alen (two feet), around 3.5 metres.

Research from our time shows that the “fighting arena” at Årbakkesanden is a burial ground from early Iron Age. There have been 6-7 menhirs and at least 35 mounds, cairns and stone rings. There is supposed to have been both clay jars and weapon in the mounds, but most of it has disappeared. There is one find in the Historic Museum in Bergen. It contains burial goods from 3-400 AD, with scraps of a needle, comb and decorated bits of bone, a couple of glass pieces, some bear claws and burned human bones.