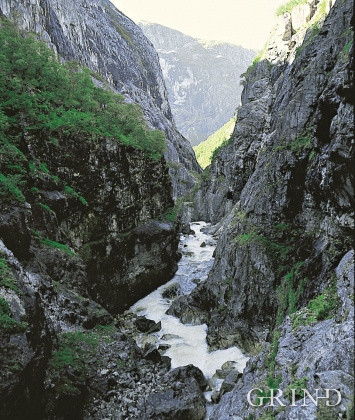 During the last ice ages, parts of the Voss river system were stolen and sent down Nærøydalen valley to Nærøy Fjord (Nærøyfjorden). Before this big river theft all of the rivers ran all the way from their sources in the mountains near the innermost part of the Sognefjord further southwards towards Voss. Evidence of the theft is still clearly visible in the terrain.

The rivers in Brekkedalen and Jordalen valleys give reason for suspicion: First, they run straight southward toward Voss, the apparent travel destination in the distance, but then the water turns sharply towards the north-east as it meets Nærøydalen valley. Valley shelves on both sides of Nærøydalen also show the remains of an old river valley that went toward Voss.

Just how did this theft occur? Also here, it is the glaciers that give the explanation: The glaciers were more effective along the old "Sognaelva river" than in the valleys that went toward Voss. After many ice ages, the carving resulted in an extension of Sognefjord, not only toward the east, but also into the side fjords. The glacier carved away in what is now Nærøy Fjord and Nærøy valley, so that the water that ran toward Voss was absorbed, or stolen. The valleys that originally went southwards toward Voss became hanging valleys of Nærøy valley, and the water found an easier path toward the north-east. The "water thief" reached almost all the way in to Oppheimsvatnet Lake, but not further. The end of the valley by Stalheimsfossen waterfall is like a dramatic stairway in the landscape. The steps mark the transition from the inner part of Nærøydalen, where the ice carved deep and relentlessly, to the more open valley above the falls, where the glacier accomplished little in comparison. When the rivers once ran toward Voss, they created a natural pattern, like a tree with branches, as most water systems do. After they were absorbed by Sognefjord and Nærøy Fjord the valleys created a barbed pattern, "agnor", and therefore they are now called "agnor" - or barbed - valleys.

The course of the river in the Nærøydal area before the ice age melt, and today, after the river changed course. (Eyvind Sindre/Inge Aarseth/Eva Bjørseth)

Right by the boundary between Hordaland and Sogn and Fjordane, by the foot of the steep Stalheimkleiva, there is a road sign that says it is 3 kilometres to Jordalen. On the outside of the steep tunnels lies the impressive Jordal canyon. Safely through the tunnels one comes to the beautiful Jordalen valley, which opens up towards the mountains.

The river falls more than 300 metres over the scarcely 2 kilometre long stretch through the canyon. This gave much energy for carving. A steady slide of stone slid down into the river from the steep mountainsides, and this stone was a useful carving tool and polished and carved into the river bottom. A canyon so deep takes a long time to create. The river is still not finished with its work. It is this canyon that is called "Hell" in Per Sivles story, "Only a Dog".

Above the canyon, the peak of Jordalsnuten towers like a sugarloaf. The bedrock contains anorthosite which solidified to rock deep down in the earth's crust in the Precambrian Era. Eventually, as the mountain chain got eroded and planed down, and the anorthosite eventually saw the light of day, the pressure in the mountain decreased. Less pressure caused expansion cracks to form in the anorthosite. The cracks developed parallel with the surface, almost as in an onion. The same type of cracks have shaped the famous "Sugarloaf" Mountain in Rio de Janeiro. But in Nærøydalen it is frost action that has "peeled these onion layers". Thus Jordalsnuten became Hordaland's "Sugarloaf" mountain, even if it is shared with the neighbouring county to the north.