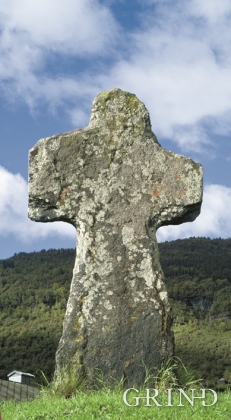 Olavskrossen (The St. Olav’s Cross) stands at the vicarage around 250m southeast of Vangen church. The old name, in use up to the time after 1950, was Steinkrossen (the stone cross).

“Heimskringla”   recount that this was where Olav Haraldsson held a meeting with the “vessers” (people from Voss) in 1023 and persuaded them to take on the new belief. The king came from Avalsnes on his way to Voss that year. He must have travelled into the Hardanger fjord with boat to Folkedal and then walked up from there with his group by the mountain pasture Krossaset and further on to the old thoroughfare across Bordalen and then to Vangen. On the farm Himle in Bordalen there is a cross that may have been erected in memory of this trip. Also on the farm Lirhus, between Lundarvatnet and Melsvatnet, there was a stone cross until the 1900s. At Krossaset in the Bordal commons a stone cross to the memory of Olav Haraldson’s endeavour to christen Norway has been erected in modern times.