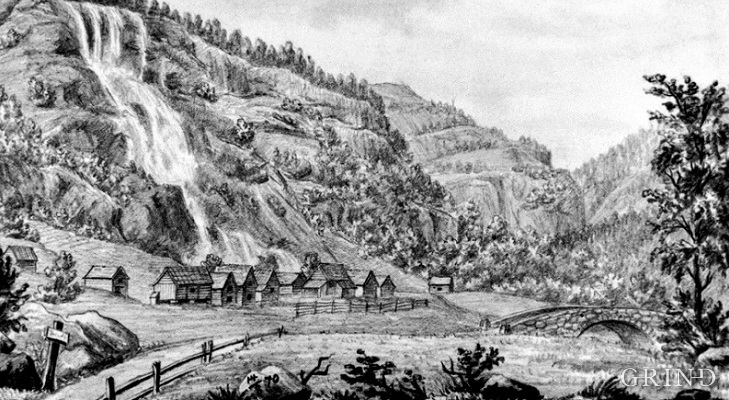 Following the introduction of fixed postal deliveries in Norway from 1647, post farms were appointed where the farmer was under obligation to bring the post to the next post farm. The farm Ttvinne is situated 12km from Rogne, the next post farm to the west, and about the same distance from Vinje. Later on a transport station was established at Vinje with the possibility for overnight stay for travellers, and from the 1830s, a hotel.

Tvinne lies by the magnificent and beautiful Tvinnefossen. One of Norway’s best known actors, Lard Tvinde, grew up on this farm. One of his ancestors was David Hustvedt, farmer at Hustvedt, a mountain farm on the other side of the valley, above the farm Gjøstein. David Hustvedt was the first mayor in Voss County, following the introduction of the laws on local administration in 1837.

The settlements in this part of the rural community are old. At Gjøstein several rock paintings are easily visible from the road at the other side of the river.

Showing the old post sacks in the yard at Tvinne. (Marita Aarekol).