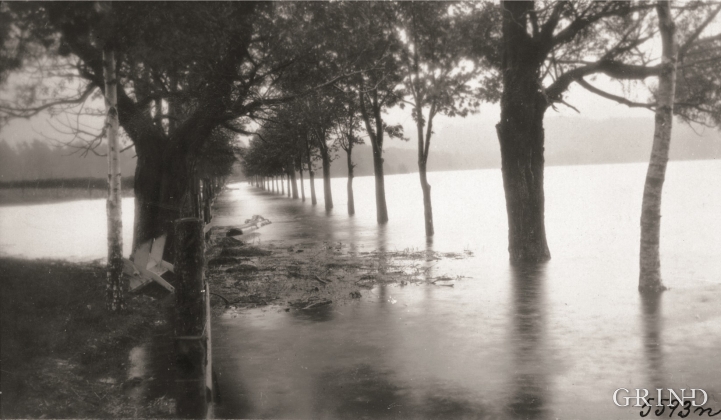 Vicarage Alley during the big flood on the 28th of September, 1917. (Per Braaten)

It is figured that if nature had her way, a so-called hundred-year flood would increase the water level in Lake Vangsvatnet to 7.4 metres above the normally low water level. Large parts of Vossavangen would then stand under water. The largest flood came in October, 1918. All of the houses along the Vangsgata streets got water in their cellars, and the vicarage also stood mostly under water. In a pigsty the water reached over the eyes of the pigs. They shrieked in chorus - the chorus was heard, and the slaughter-ready pigs were moved to dry ground.

Now the worst flood danger is averted - the narrow outflow at Bulken has been widened. Already in 1854 Søndre Bergenhus Amt sent the first application to the canal authorities (NVEs predecessor) about sinking the level in Vangsvatnet. Roughly two years later the work had begun, but the measures were shown not to be enough during big floods. Over the next hundred years, new plans were continually introduced, but got thumbs down. There was a fear that any new measures would just transfer the problem down to the Vosso. In 1990 a viable plan was finally put on the table: The outflow area at Bulken should be stabilized with a 50 metre-wide stone threshold, which was formed in such as way as to ensure that the water level also would not get too low during dry periods. The river channel below would be widened and deepened by exploding away 20,000 m³ of the mountainside. This should give enough room for all of the water during a really big flood. The plan was carried out in 1991-1993. The initiative was controversial, and it still is. One of the concerns is related to what the consequences of the changes might be for the salmon stocks in the Vosso.

There was a major flood in the autumn of 2014 in Vosso. The record for water volume was measured at 2:00 a.m. between the 28th and 29th of October: 802 m3/s. The water was even higher in the Raundalselva River at Kinne, before the entrance to Lake Vangsvatnet; here it was 847 m3/s. This is the largest volume of current ever measured in Hordaland. The flood caused great damage in most of the rivers in inner Hordaland and Sogn. If the outflow of Lake Vangsvatnet had not been widened the damage in Voss would have been much greater. Particular damage occurred at Nortura's facility in Evanger, where over 5 tonnes of specialty lamb meat had to be discarded.