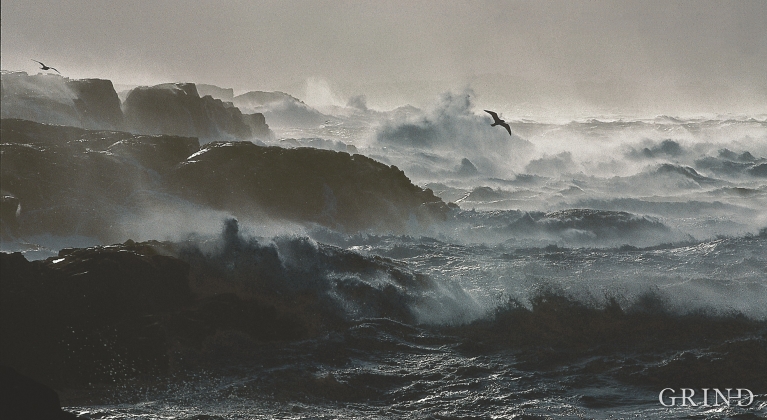 The large coastal waves that crash down on the islands west in the sea gather their energy from storms and winds all the way out in the North Atlantic Ocean. The most common place of origin is nonetheless the North Sea. When these waves break over the skerries and islets along the shore, or on the rocky outermost islands, their energy is released. This takes the form of turbulence in the water and sea spray up on land. Can the enormous energy contained in the waves be exploited?

Breaker waves, the same as "smooth" waves, are a wave field that no longer receive energy from the wind. They lose little energy out in the big ocean and can propagate themselves over large distances, often thousands of kilometres. This propagation occurs with increasing periods (i.e., time between waves) and wavelength. If we look at the sea, we almost always get the impression that the waves come in groups. This will always be the case when waves with unequal periods occur together.

When the waves break and form breakers on the shore, stone and gravel may be thrown up onto land. Then, raised beaches form, such as can be seen for example at Herdla. On the west side of Øygarden, the waves meet steep mountainside for the most part, without being able to break in the normal way. Instead, the waves are largely refracted back. Then, they meet other waves on their way in. This results in standing waves. Such waves can be so choppy that the water in fact splashes. People in smaller boats experience this as if they are being cast around. The waves that come in to some of the many sounds that run through Øygarden will also be influenced by currents. When the waves meet the currents, they get raised up and can in many instances break powerfully.

Waves get propagated more slowly in shallower than in deeper water. A wave front that nears a headland that sticks out like a ridge under the water will curve around the ridge. In this way, the energy from the wave gets concentrated toward the headland. In such waters there can be very rough seas, which gather stones and blocks on the sea bottom. The opposite case happens when the waves that come into a bay are deflected nearly parallel with the land. In this case the wave energy is distributed along the whole shoreline. The waves will be relatively small inside the bay, so that the material that gets deposited out is finer than at the headland, i.e., mostly gravel and sand.

In the 1980s two attempts were made to establish a wind energy station on Toftøyna in Øygarden. This location was chosen because Toftevika Bay is 50–100 metres deep all the way in to the steep cliff side on Kvaløyna. Therefore, most of the wave energy reaches all the way in to the cliff side. One of the power stations made use of a naturally bow-shaped bay. The energy got concentrated inside of this bay. A half metre-high wave in the sea outside grew to over three metres in a cement wedge innermost in the bay. The waves pushed the water up into a basin, that was the reservoir to a little power station. In the other power station, the waves influenced the air pressure in a silo-shaped tank. The tank went down under sea level inside the rock with an opening out to the sea. The air pressure drove a generator with the help of a fan. Both the the power stations failed because of an underestimation of the wave energy.

The waves that broke against the land in bad weather are a dramatic and beautiful sight. But, the sea is temperamental: occasionally, a wave comes in that is much bigger than the others. Such waves can reach a far way in over land. Then, it is very dangerous to come too near, especially on the slippery rocky skerries. Several fatal accidents have occurred in Øygarden because this danger has not been taken seriously enough.

Wave energy at Toftestallen – an unsuccessful attempt at harnessing the great powers of the North Sea waves. The installation was destroyed by waves and the stones that they carried with them - their powers were just too great. (Helge Sunde)