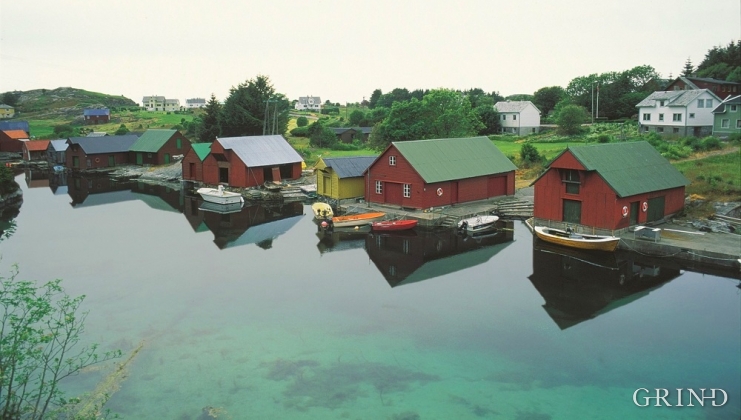 Herdlevær lies on one of the small islands west of Hjeltefjorden, facing the North Sea and the big ocean. Today you may arrive there by car. The numerous islands are linked together by elegant bridge spans made of concrete. Fifty years ago it was half a day’s journey to get to Herdlevær from the mainland by your own rowing boat or ferry.

In medieval times Herdlevær belonged to the royal estate of Herdla. In the sheltered bays around Straumøy and Skogsøy, with favourable harbours and short distances to the rich fishing grounds, there are many house sites and boat anchoring places that are a reminder of great activity in former times. Studies have shown that people have come here in large numbers to fish. Herdlevær has been a seasonal location, only coming to life during the fisheries, but with traditions as far back as to early Viking times. In the Middle Ages the rich fish resources here have been an important part of the king’s economy. It is not unlikely that the king himself, through his local chiefs, organised the great fisheries that went on here, both for the royal household and for sale.

From ancient times there have been three settlements at Herdlevær, Oppigarden, Midttunet and Nordgarden; altogether 11 units. Half of these still carry on fishing today. The 11 units have cooperated on five seine groups and some of these are still operating. The sea-houses and the boathouses at Herdlevær lie clustered along the sound between Herdlevær and Skogsøy. On the outermost, bare islands facing the North Sea, fishing has at all times been an important part of economic life. It is difficult to ascertain the age of the permanent settlement at Herdlevær.

We get a true close-up of the cooperation and collaboration when we consider how the users organised the work in each land seine gang or fishing gear. Every seine owner in the neighbourhood had his own parts of the seine, in accordance with the debt he owed. In the old cooperative system every owner had a duty to keep his part in order: repair, impregnate and replace with new sections where necessary, all under the neighbours’ supervision.