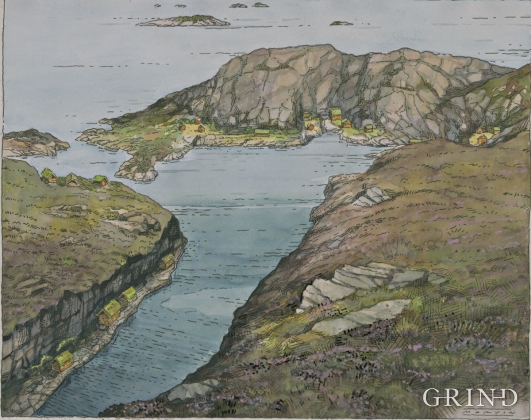 This is what the northernmost part of the fishing village might have looked like in Viking times (reconstruction by Marvin Halleraker 1993, based on S. Alsaker 1989).

A FISHING VILLAGE FROM THE IRON AGE

It was not black gold (oil), but the ocean's silver, that brought riches from the west of Hjartøy 1000 years ago. The archaeological excavations that the University Museum of Bergen carried out at Hjartøy, the same place where the Oseberg pipelines were to come up on land, turned up other interesting discoveries.

By two small bays on the western part of the island, North and South Hjartøy Bay, 36 homestead sites and 9 boathouses were found. The homestead sites were overgrown and hardly visible. Low walls of stone formed the foundation for small wooden buildings with rooms 15-25 m2, built near the sea where it was possible to drag their boats on land.

Along the inside walls there were low ridges of stone, thought to be the remains of benches, where it would have been possible both to sit and lie down.  There was a hearth in the middle of the floor - the fireplace. This is where they would have made their food, warmed themselves, or dried their clothes after cold and wet days out at sea. All of the finds in these homestead sites suggest a seafaring lifestyle based on fishing. In one of the homesteads bones were discovered in the fireplace, believed to have been the remains from the last mealtime, over 1000 years ago. On the earthen floor beneath the bunk a slate sharpening stone was discovered, along with some fishing hooks. A crushed soapstone pot with the charred remains of food in it lay at the edge of the fireplace.   Right beside this a small bit of the same stone was found, formed into a fishing sinker.

As with the homestead sites at Risøya in Sund, it is thought that these remains of coastal dwellings testify to an ancient seasonal fishing culture typical of the people living in the inner fjords at that time.  The bone remains are from cattle, sheep, goats and red deer, suggesting that the men took with them some of their animals from home.

Datings show that the homesteads were in use from the 300s until about 1050 A.D., but that they were most active from about the 700s throughout the whole of Viking times. There were so many coastal homestead sites in use that it is fitting to speak of this area as a fishing village. If we imagine that all of the homesteads were in use, and with a boat crew if 4 people in each house, as many as 160 men could have been fishing here at one time.

A day out at sea

When an archaeologist works slowly and systematically through an excavation site, and allows the traces of his ancestors to sift slowly through his hands, it is easy for his imagination to wander. Gradually, the people behind the artefacts emerge, along with a picture of their daily lives as they perhaps lived back in Viking times.

"A long day on the sea is over, the fish are taken care of, and the boat has been hauled up to the boathouse together with the boats of the other three fishing teams that have a boathouse right nearby. Here one has to share the little space there is, both outside and inside the houses. Even though he has come ashore, there is still much to do before he can crawl into his bunk for the night. The storm earlier in the winter damaged the roof on the homestead, and new birch bark and thatch needs to be laid. Not welcome work after many hours behind the oars on a rough sea, but it is some comfort to see the smoke rising from the chimney, signalling that the dinner pot is warming over the fire.

There is still a fair bit left of the salted mutton they took with them from home, but four men consume a lot of food, so it is necessary to supplement with some fish or sea birds that get caught in the fishing nets during the night.  The food never tastes better than when fishing, even though it is not the women who have prepared the meal. After the dinner pot is empty, the bones and other remains are thrown on the fire, giving light to work by for the day's final tasks. There are fishing hooks and cutting knives needing sharpening before they row out in the morning. On the other side of the fireplace sits the youngest member of the team, making sinkers from the bits of the old soapstone pot that recently shattered from the heat of the fire. The flames slowly die out."