HAND-WEAVING ON THE WARP-WEIGHTED LOOM

It was the researcher of day-to-day life, Eilert Sundt who first made people aware of the warp-weighted loom. The article he wrote in his newspaper: ”Friend of the People” in 1865 shows that he had had the experience of seeing a Lappish woman weaving branches in Troms County. He also portrays a hand-loom in ”the southern part of Bergen County (south of Sogne Fjord) .....” where they wove tapestries with multi-coloured squares and stars. They were beautiful and particularly solid bed-coverings”. This corresponds very well with the decorated bed-spreads from Nordhordland and Sunnhordland which we know today, woven on the upright loom, åklestøyrer as they are known in the dialects of Hordaland. In his popular magazine “Friend of the People” Sundt also included an illustration of an upright loom from Fana which came into the possession of the University’s Museum of Antiquities in 1860; it was later deposited in the Norwegian Folk Museum. And still today the warp-weighted loom is a living tradition. When Berta Liarbø in Fitjar sets up a tapestry on her warp-weighted loom. She is working in an unbroken weaving tradition going all the way back into prehistoric times.

A bedspread was originally a material used to cover a bed.  Besides the bedspread has another name in Hordaland, brotkvitel, that is a patterned bedspread of medieval origins. The word is to be found in the Old Norwegian language and has a thousand year tradition behind it. It can be interpreted as a bedspread (a woollen bed cover) with patterns, that is to say with patterned borders. In Sunnhordland in several places bedspreads are called brautåkle.

In Hordaland two types of loom have been used to weave bedspreads on.  One type is the usual loom or flat loom. This name derives from the fact that the basic fabric is stretched flat between two rollers.  The flat loom was to be found all over the county. Historically one can say that the flat loom is the youngest. It came into use in the High Middle Ages here in Norway and spread throughout the rural districts.  The other loom was known as the “bedspread loom”, the “warp-weighted loom”, or simply the “stookie”. The official name is the warp-weighted loom because the basic fabric is stretched between a drum at the top of the loom and stones, which the basic fabric is fastened to at the bottom.

The Norwegian textile researcher Marta Hoffmann, in her doctorate thesis, “The warp-weighted loom” has made a list of the bedspread looms in western Norway which are to be found in Norwegian and Scandinavian collections.

The material which came into a major textile exhibition in Sunnhordland Folk Museum arranged in Stord showed that the bedspread loom was more or less dominant as equipment for making bedspreads in Sveio, Stord, Bømlo, Fitjar, Halsnøy and the Fjelberg islands in Kvinnherad, Tysnes and Austevoll, as well as Midthordland and Nordhordland. In the rest of the county they used the flat loom.

The size of the bedspread can vary, but not very much. As a rule it is about 120 cm wide and 180 cm long. This has naturally to do with they fact that those who used the beds were shorter and wider and broader than today. How is it possible to tell whether the weaver has used a bedspread loom or a warp-weighted loom?

On the bedspread loom the weaver first has to twist a thick cord of threads in the colours she is going to use in the bedspread. The cord has to be a little longer than the beam up on the supports or oppstøna.

The warp is made with whole warp loops at the one end. The thick cord is threaded through the whole warp loops and then sewed on with strong thread to the roller up on top of the loom. On the roller there is a strip of wood in which many holes have been drilled, and the needle is threaded through these holes. In this way the bedspread gets a third “edge” on the upper side, all the basic fabric loops around a cord on that edge. The ends of the threads will be made into tassels or plaits on the upper corners of the bedspread when it is finished. You can only get this third edge like fringe on the upper part of the bedspread by using a bedspread loom. This is therefore a sure sign that it was the warp-weighted loom that was used.

On the lower part of these bedspreads the basic fabric has naturally been cut off, and the ends can have knots on them which hang free. Crossing threads in different patterns and colours over the last fabric can also be made so that it is not so easy to unravel.

The weaving took place below the big roller on the bedspread loom after the thick twisted cord, and also the warp loops, are sewn on to the strip of wood with the holes in it. The loops were evenly distributed as the threads were sewn on. The stones which stretched the warp were tied at the bottom to the floor, and they must be weighed so that the weight is distributed evenly between the threads of the fabric.
The distinction in the loom comes out in that every second thread in the warp is fastened to a heddle post with heddle loops. The other half of the warp threads are resting against a divider at the bottom of the loom frame where pins are often placed to prevent the warp threads from sliding sideways along the divider.

With this equipment the weaver can weave so-called toskaftvev, the simplest form of fabric. On the one side is the heddle stick rests against the upright supports. On the other side the heddle stick is drawn out until it rests on two forks, one on each side.  In some places these were called crutches and were fixed in holes on the side posts. There were several such holes so that the forks could be moved up or down. When they wove with these two divides the threads were pulled right through the weaving frame from edge to edge.

The weaver cannot use the shuttle to lead the weft thread back and forward on the fabric base, because the fabric base is hung right up and down. The weft is therefore wound up into a little extended “doll” with a more fixed end to hold on to. The weft is tamped down with a loom spoon which is usually made of wood or from whalebone.

When we compare bedspreads in Sunnhordland with bedspreads in Nordhordland and Midthordland, the similarity is very noticeable. But we also see there are “distinctions in dialect”  between the rural districts in terms of the use of patterns and in the “style” of these bedspreads. This is relevant first and foremost in bedspreads with decorative borders, smettebordar and krokbragd, and other techniques which are not two shafted.

There are many details in the art of weaving which have their own nomenclature, whether it is techniques or variants on patterns. The simple two shaft weaving, with generally weft threads, gives a rug with horizontal borders or stripes, such as we, for example, know from the beautiful Sami “gren” rugs in white and black sheep’s wool which are also woven on a warp-weighted loom. It is this type which is called “brotkvitel” in Old Norwegian; a main variant of the bedspread types right up to our time (the brautåkle). For all other techniques than to shaft, the weaver has to use smetting (double knotting). It is called “threading” or “slipping”. Here you have to count the weft threads and thread the weft thread in and out between the base threads with the fingers. This is what is meant by “slipping”.

Using this technique it has not been especially more time-consuming for the weaver, with this type of loom, to use a series of different patterns and colours in her bedspread. Thus the material from the wrap-weighted loom has become so varied and so thrilling, and many bedspreads bear witness to rich imagination and creative ability in the weaver. In reality this method is very similar to tapestry weaving in our days with the difference that on artistic looms one can, as a rule, weave from the bottom and upwards.

The interesting thing is that in the variant of the warp-weighted loom which is found in Hålandsdalen, can give an indication of the types of loom which were used for tapestry weaving in the valleys of eastern Norway in the Middle Ages and in later centuries.

The weavers in Sunnhordland threw caution to the winds and came up with big slip borders,  often three or four on the same bedspread. There we find eight-leaved roses, different geometrical figures such as crosses in many variants, “step figures”, lightning borders, shortened lightning borders etc. They can be presented symmetrically or lined up in rows. You also find initials and dates of years in these slip borders.

The use of dyes shows a fixed tradition which goes far back in time. It was usual with the black and white sheep colours, as well as yellow and red and partly blue. The rule was that each bedspread would have from 4 to 6 or 7 colours, usually plant colours; blue, cochineal or bedstraw for red and yellow from birch leaves. The chemical dyes are of course a later phenomenon in this connection, but they did not lead to weavers using especially more colours than before.

The use of materials was, of course, also limited to what was available in the local environment. They got weft of wool from the West Norwegian native sheep which was the old race of sheep in the area, but during the 19th century foreign strains of sheep, especially from England and Scotland came in. Early in the 19th century one can find examples of bedspreads with homespun cotton as a white weft wool. The condition for this must have been imported raw cotton, and it was no doubt the pure, light white colour which was the temptation.

For the warp hemp was dominant, but it did happen that linen, tow, wool, or factory made cotton thread was used. 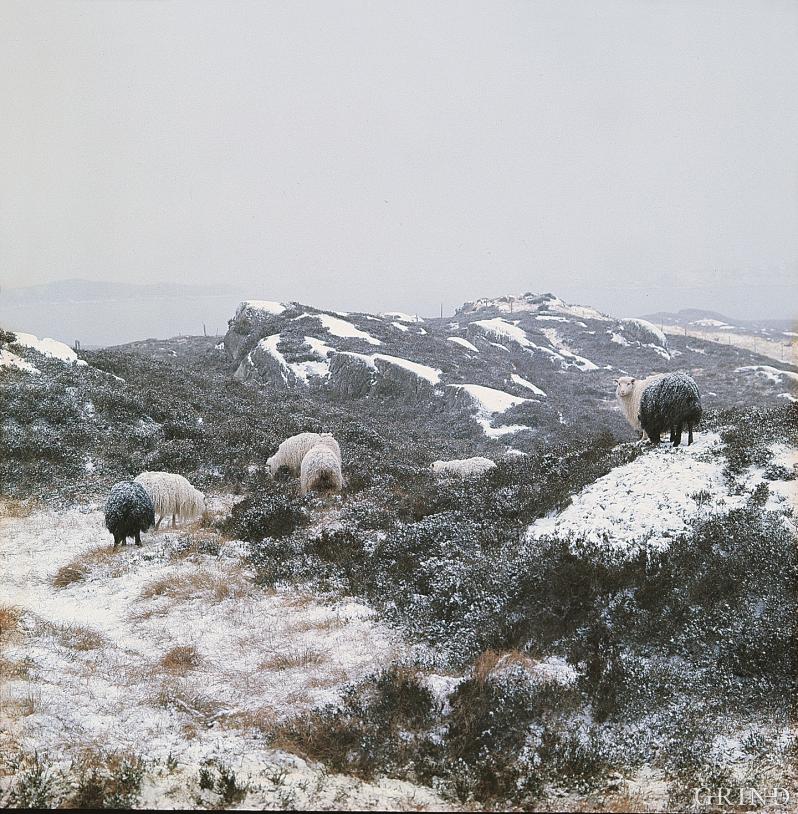 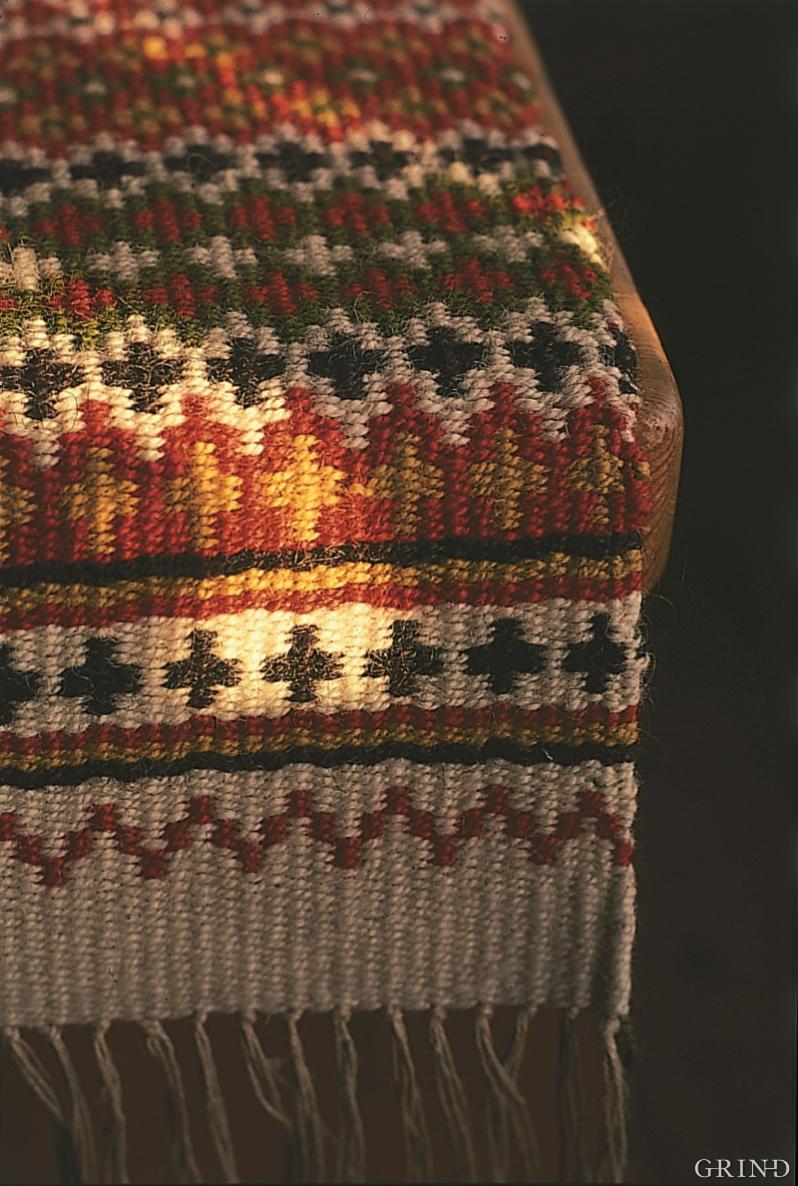 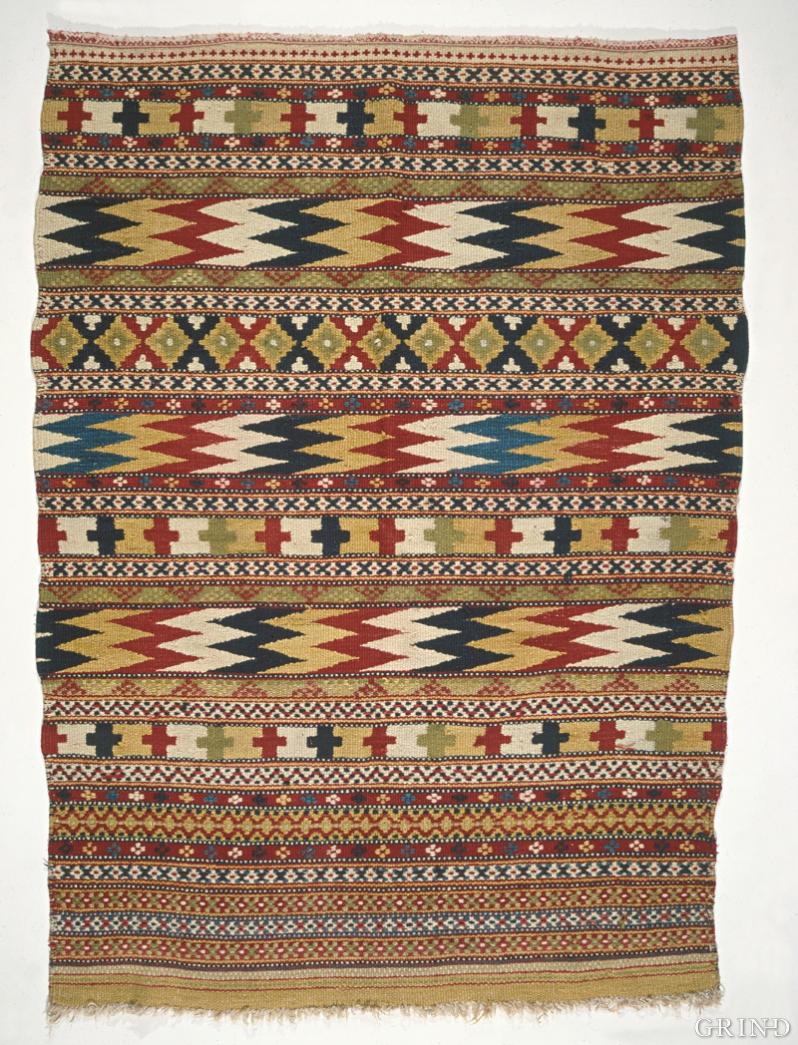 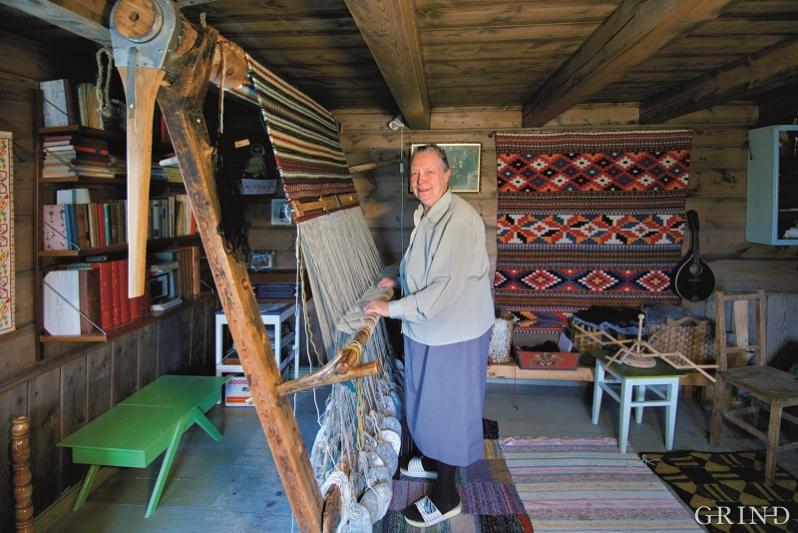 Bunches of thread in different colours are slipped deftly in  and out between the fabric threads by Berta Liarbø.. It is the weighted stones that keep the warp threads stiff. We know this from finds from 3,000 years ago. (Jan Rabben).