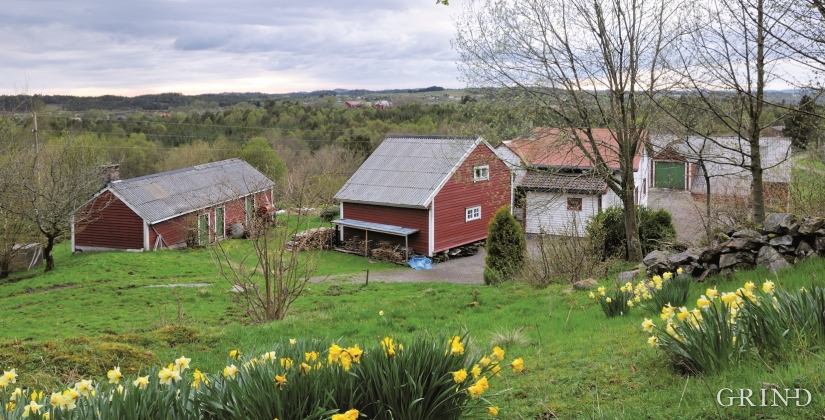 Liarbø lies a little south of Storavatnet – a typical smallholding in the coastal community of Fitjar. This is where the Norwegian textile researcher, Marta Hoffmann encountered the tradition of weaving on an upright loom, a tradition kept alive in these communities up until the last generation. It is in the outlying coastal communities that the upright loom has been upheld as women’s craft, being part of the farm household, and in Fitjar and in Hålandsdalen the women still know this old art. When Sunnhordland Folk Museum organised an exhibition in 1958 on tapestry weaving and upright looms, a great amount of material came to light.

Oppstadgogna - A weaving tool through 3000 years

In Hordaland, the art of weaving on oppstadgogn, or tapestry poles  was mostly forgotten at the start of the 1900s. But in Sunnhordland the knowledge of this type of weaving has lived longer, and longest of all at Tysnes, in Fitjar and in Hålandsdalen in Fusa. Berta Liarbø from Fitjar is one of the last carriers of tradition still alive, but she has taught others to make sure that the knowledge of this fine craft will be carried on.

Manndalen in Troms is another main location for the traditional upright weaving. Here we also find some ancient details in the weaving of “branches”, a variation typical of the sea Sami people. It is easy to imagine that these blankets in sheep white and sheep black are similar to those known as bròtkvitel in the Middle Ages, a woollen bedspread with simple edges or brautar as pattern.

Oppstadgogna has acquired this name because the warp of the loom is stretched between a pole at the top of the loom and kept taught with the weight of stones – kljåsteinar – fastened at the bo ttom. The warp thus hangs almost vertically. This is a type of loom that was in use here from prehistoric times, the oldest known type of loom in the Nordic countries. In archaeological finds several thousand years old there are traces of stone weights used for stretching the warp.

The weaving starts at the top by the pole and the weaver slips the cross-thread through the warp with the fingers. The cross-thread is wound on a “yarndoll” that can be slipped forward and back. Every new cross-thread is fastened with a weaver’s reed. The same technique as was in use several thousand years ago is probably still in use. It is the weaving method of the Bronze Age that has survived in the outer areas of Hordaland and in Troms and Finnmark, right up to our time.

In the subsistence economy spinning and weaving were common activities in all homes. Weaving was not left only to a few specialists; mothers taught their daughters to weave tapestries and some of them were better at it than others.

An upright loom, which can be seen at Årskog museum, is marked A.J.D.V. 1855. This loom was probably given as a wedding present when Anna Johannesdotter Vik was married in 1855. Two of the daughters of Knut Olsen Fitjar and Marta Jensdotter, Mari (born 1809) and MARTA (born 1807), were tapestry weavers. Marta got married to Liarbø, and she left a lasting legacy. When her husband died in 1841 she was 34 and had 5 children. In her second marriage she had the daughter Anna in 1848. Anna was trained as a tapestry weaver by her mother, and she passed on the knowledge to her daughter Oline (born 1884).

And while the weaving tradition became lost on the surrounding farms, Oline Liarbø carried on her craft and taught her daughter Berta (born 1921) the art of weaving. Mother and daughter carried on with this handicraft for many years. When Oline passed away in 1874, Berta has kept up the weaving and taught the art to new weavers. A great handicraft tradition from prehistory has been passed on and is an important part of the national cultural heritage.