THE OS RAILWAY AND THE FJORD BOATS

It was the year 1927. Amongst the commercial advertisements in the local newspaper “Midthordlands Avis” stood this little advertisement, composed in a barber’s shop in Osøyro, the communications centre for inner Midthordland. Between the lines we can detect a cultural view, an expression of a social convention borne forth by two generations of regular transport services between town and country. The public transport services formed the basis for this development. They created conflicts and clashes, but also economic and cultural growth - a development which erased the distinctions between town and country. The close-up picture of Os railways and the fjord boats represents at the same time a major chapter in the story of transport in western Norway.

“The Os railway should be regarded as the most timely link between the town and its hinterland, to whose cultivation it will be a major contribution, and so also will be of profound significance for Bergen itself”.

It was the district doctor, Captain D.Kruger who expressed himself thus in 1891, during the planning of the biggest transport project in the rural districts of Midthordland at the end of the 19th century, that is the railway from Nestun to Os.

The railway service between Nestun and Os was opened in 1894. Behind this bold initiative there lay many needs that the steamship services could not satisfy. The rural districts which were not situated on the sea had not taken any part worth mentioning in the development that steamship traffic had created in the districts along the sea. The road network was poorly developed and was not suited to the effective transport of goods. When Ulvensletta in Os was brought into use as a drill ground, the demand for inland transport became pressing. In addition it was estimated that the traffic with tourists and second-home owners - city folk in the country - would increase even more with better communications.

The rural districts were undergoing a period of radical change in these years. The sale of Lyse monastery estate, purchase for freehold and change from the old strip-farming system speeded up the process. The agricultural school at Stend had the same effect. The transformation of agriculture required speedy and effective transport of fresh produce to the main markets in Bergen. The city was growing and the prospects for the growth in sales of agricultural products were correspondingly good.

Behind the idea of a railway were the mayors of Fana and Os, the district doctor in Os and two big Bergen merchants. There was also great interest for the project in Os and Fana. The municipalities subscribed for relatively large shareholdings; Os municipality for more than a year’s budget at that time. The farmers gave free land for the railway line. The State’s role was limited to a shareholding of 33% of the total share capital and other obligations, in accordance with the relevant regulations for the operation of railways.

The new railway line opened in the summer of 1894. Os was the final station and the main base with big engine sheds, workshops, station building and turntable for turning round the locomotives.

The newly acquired locomotives: “BJØRNEN”, “ULVEN” and “OS” were to pull the trains along the 27 kilometre long route, up through Osdalen, south of Kalandsvatnet and through Rådalen to Nestun. There were 12 stations on this stretch as follows: Os, Kuven, Søfteland, Kalandseid, Kismul, Hamre Fana, Solbakken, Stend, Rådalen and Nesttun. The line was narrow gauge with a gauge of 750 mm, and the speeds were not very impressive, seen from our perspective. But the ticket prices were reasonable, and the Os Railway was a revolutionary step forward for the travelling public.

Many stories were told amongst folk about the dawdling, little train. Both its size and its speed were grist to anecdotes which have survived the Os railway up until our own times.

“When is the toy train leaving?” was the mocking enquiry from a recruit on his way to Ulven parade ground.

“When all the tin soldiers are aboard” was the abrupt answer from the conductor.

One morning when the train was on its way from Os station, the conductor came wandering along the platform one second too late. He ran after the train, and had caught up with it by the time it came to Kuven station!

The railways had to go through a period of teething problems before things improved. After the beginning of the 20th century there came an even period of improvement which culminated in 1922 when bus traffic came seriously into the picture. During the First World War, rolling stock was improved, electrical light was installed in the stations and plans for conversion to a normal gauge were discussed seriously. This was a part of a wider planning effort with a view to transfer to state ownership, extension of the line to Hatvik and a possible extension through Fusa to Hardanger and Voss. The railway was still regarded as the most effective means of inland transport. But the turning point came with the economic depression in the 1920s. This put an end to further railway construction.

The railway and the rural districts

Just like the “steamer” the railway became an important environmental factor for the rural districts. Around the station buildings in the Swiss style, with carved, decorative mouldings and big roof overhangs, a small urban centre would grow up. The trains, particularly the locomotives, had an almost magic power of attraction for people Inquisitive souls came a long way to Os in such large numbers that the railway authorities found it worth the bother to charge 5 øre per person for a “platform ticket”.

The railway also represented something new in working life. The main administration was located in Osøyro and gathered together a number of professionals. Many of these made a positive contribution to the cultural life of the rural districts. Railway functionaries were a special group, easily recognised from their uniforms. There was prestige attached to positions in the railway. People who were employed, mainly stayed with the railway for all of their working lives.

The railway made the town so very much more accessible than before. New agricultural production in Fana and Os took off, and with it, milk production. The need to organise sales led to the shipping of local dairy companies around the rural districts, as well as to the other side of the fjord. The Fusa districts began to send fresh milk with the railway in 1911. A large part of the handicraft production in Os went by train to Bergen and was sold there. With the opening of the Bergen Railway an even bigger market was opened up for the timber and wood products industry of Os.

From the 1890s onwards well-heeled Bergen folk began to buy sites for villas on Bjørne Fjord. “City folk in the country”, city folk who could afford a holiday stay in the country, rented places on the farms. This gave the farmers very welcome additional incomes. Several hotels started up in Os and Fusa., including Solstrand Hotel, Osørens Hotel and Prinsa Hotel in Osøyro.

This was the conclusion of the chairman of Midthordland Steamship Company on the proposal for transport cooperation with the Os Railway in 1893. As soon as the decision on railway construction was made, there was contact between the railway management and Midthordland Dampskibsselskab (Steamship Company) about coordinating services. In 1893 the company issued a proposal for coordinated boat - train services. The Midthordland Steamship Company was to establish express services on Samnanger and Sævereid Fjords, with as few as possible intermediate points. The idea did not work, probably because the Midthordland company, due to its poor finances, did not dare to undertake such an experiment when it came to the bit. Nor were the two parties in agreement about the tariffs for the use of the railway’s quay at Osøyro. With this the seed was sown for a clash between passengers and goods which from time to time blew up for a whole generation in the future. This was a source of constant irritation for the travellers who were dependent on the boats and the railway.

The transport needs in the rural districts of the fjords grew considerably in the 20 year period  after the turn of the century. Economic activity flourished during the First World War, and the demands for effective transport were correspondingly strong. The Midthordland Steamship Company tried to meet these demands by expanding its fleet by three ships. This gave the rural districts on the fjords a frequent service with each other and with Bergen. But the times at Os were planned so that the fewest number of passengers could go over directly to the train. They could choose; either they could wait many hours at Osøyro or a steamship trip all the way to the city.

Around 1920 the Os railway and the Midthordland Steamship Company at last buried the hatchet. The transport needs of the rural districts had generated a public outcry for a proper connection through Os. In addition rural people now had a powerful means of pressure. Motorboats and motor traffic had begun to find a place in the overall transport picture. Economic and social development had brought with it demands that neither the railway nor the steamboats were able to meet.

For the farmers in Fana and Os motor traffic opened up a way for greater sales of fresh milk to the city. Owners of the rural dairies got together to buy vehicles and transported fresh milk to Bergen. From the 1920s and onwards a constantly increasing part of the fresh milk deliveries to Bergen went by motor vehicle; the same applied to passenger traffic.

The consequences for the railway soon became apparent. From 1923 onwards the Os Railway experienced a dramatic fall in incomes. If the railway was to meet the competition effectively then it would have to invest in technical improvements and raising standards. The management of the railway put its faith in a positive recommendation from the Norwegian Parliament’s (Storting) Railway Committee which came on a tour of inspection in Hordaland in 1922. They came to Os - by motorcar!  But the likelihood seemed to be little. There was no other way than to meet the competitors with their own resources – a bus service.

In 1926 the Os railway got a licence for a bus service between Os and Bergen via Vallaheiane, and between Bergen and Fana through Rådalen. Both these routes were served by private bus companies, and a condition was that the Os railway bought the vehicles from these companies at face value. It turned out that the railway only managed to buy the service via Vallaheiane. From 1925 the railways services ran at a loss and so there was no possibility of taking over the Fana service.

The Os railway had a licence for railway operations up until 1st July 1934. Because of inadequate transport capacity on the road network, the railway administration had the licence extended for one year. On the 1st September 1935 railway traffic between Nestun and Os stopped for good. 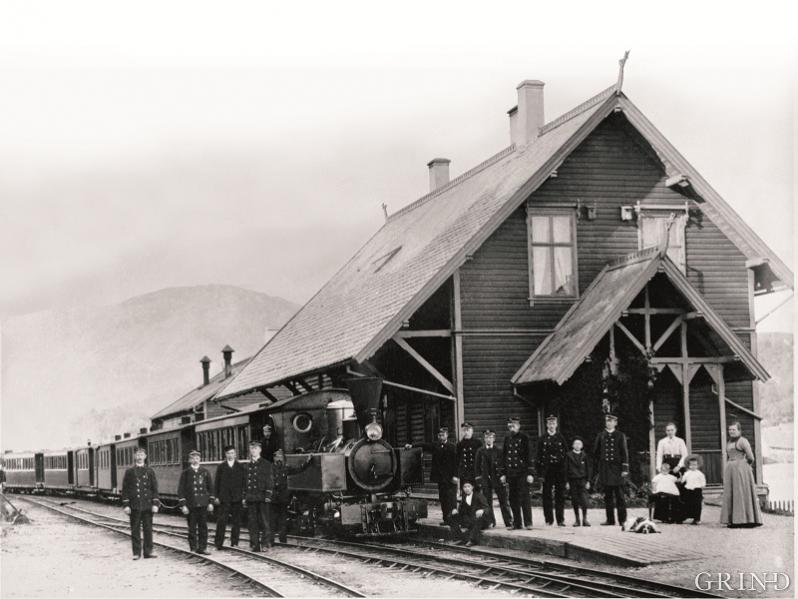 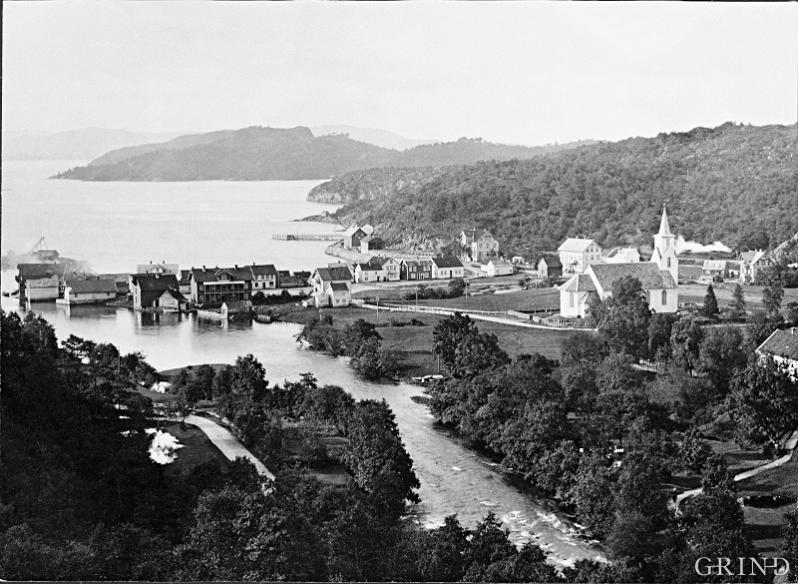 In 1890 Osøyro was a little beach place. In the 1920s  Osøyro had become a trade and communications centre for the rural districts on Bjørne Fjord. The steamship and the railway had combined to create the basis for this development. (unknown, owner: Lokalhistorisk arkiv, Os). 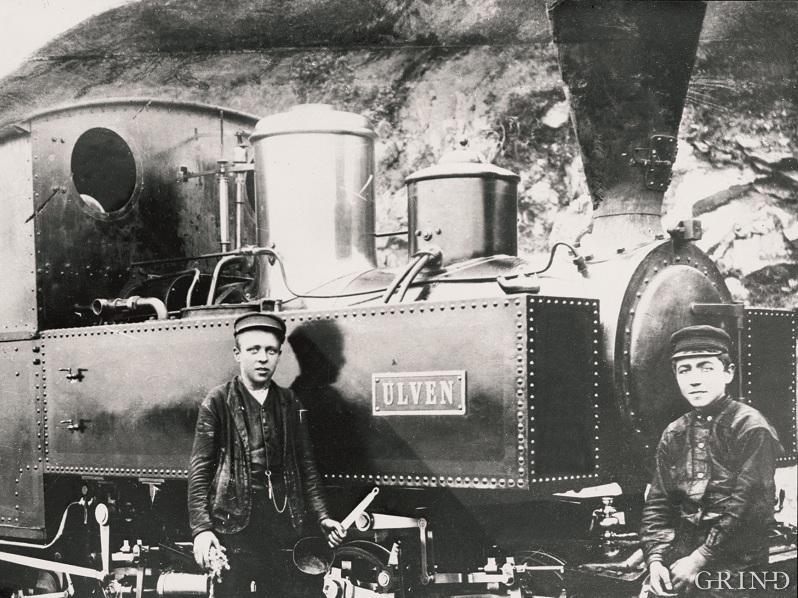 The locomotives were built in Belgium with a licence from the French factory, Decauville. (photo: unknown, owner: Lokalhistorisk arkiv, Os (1728)). 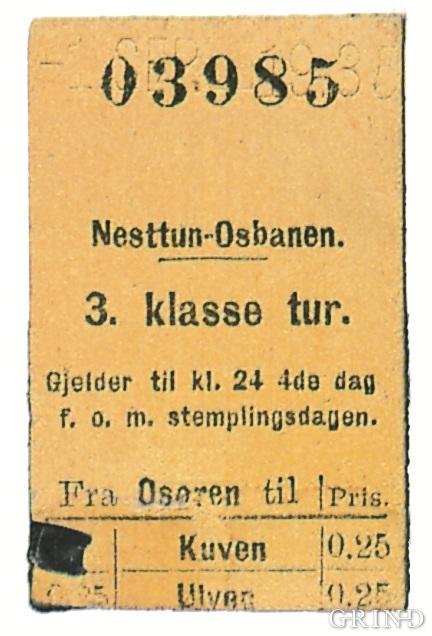 A ticket from the last trip on the Os Railway, September 1935. 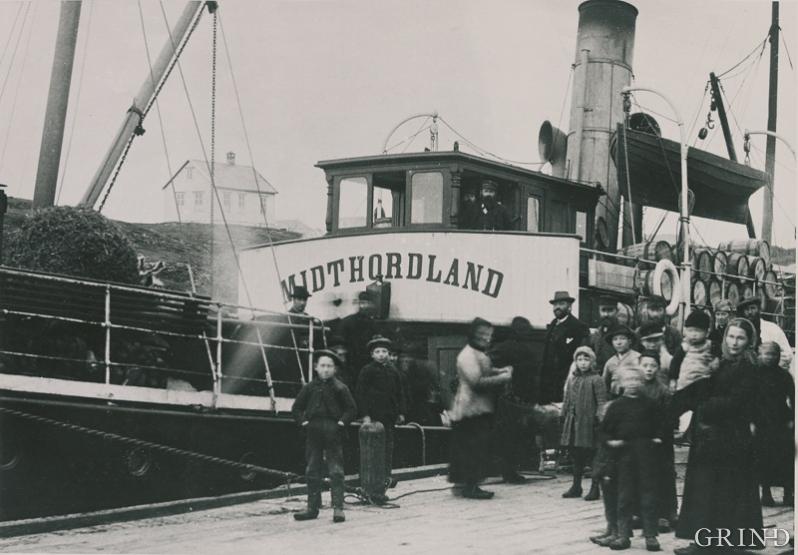