In many ways, we know more about the Caledonian mountain-building history than we do about the subsequent period up until the beginning of the Ice Age roughly 2-3 million years ago. This is because we have practically no geological layers from the time in between. If we move out into the sea, however, the situation is entirely reversed. There are many layers from the last few hundred millions of years preserved in the North Sea. Following the discovery of oil in Norway at the end of the 1960s, oil geologists have studied these layers in detail. Even though the history of the North Sea Basin is quite different from the history of Hordaland, the two are closely connected. When we compare this information with observations and modern analytical results on land, we can formulate a general picture of how Hordaland has changed over the past 400 million years. But, the specifics remain largely unknown.

In West Norway in the early Devonian, the earth's crust was abnormally thick due to the high mountains that characterized the landscape then. This was an unstable situation that caused a partial collapse of the mountain chain. As we learned at the end of the previous chapter, this happened because the thrust sheets slid back toward the northwest, at the same time as there was a lot of movement along what later was to become Hardanger Fjord and Fens Fjord. The erosive forces on the earth's surface were all working together: wind, frost and running water worked continuously to flatten out the mountains and highlands, as they still do today.
These forces worked effectively after the Caledonian compression of the earth's crust ceased. Therefore, the landscape changed dramatically during the Devonian Period. Remains from the mighty Devonian conglomerate deposits from Holmengrå and northwards are testimony to the steep valley sides and rapid landslides of stones and blocks. Large landslides must have been quite normal during this period, from mountains gradually giving way to the forces of nature. The landscape became flatter, quickly at first but eventually slowing down. Sharp, towering peaks became lower and more rounded by the end of the Devonian Period. After the Devonian, even the lower mountainous areas were worn further down. In this way West Norway and the rest of southern Scandinavia were transformed into a relatively flat landscape, or "peneplain" (which means almost flat), not unlike the situation at the end of the Precambrian Era, before the rise of the Caledonian Mountain Chain.

The climate of West Norway must have changed after the Caledonian mountains were eroded down. Levels of rainfall declined to far below what we are used to today. In addition, Hordaland lay near the equator during the Devonian, roughly as near as Brazil is today. Eventually, Hordaland was transformed into a warm and flat desert landscape with occasional rivers and shallow seas that provided fertile conditions for primitive plants and animals. Throughout the rest of the Palaeozoic Era we see an increasingly rich and more varied fauna and flora. Already by Devonian times there were different types of plants and fish. Occasional fossils of these are found in Devonian deposits north of Hordaland. But proper grass, that could have bound the earth effectively and hindered the development of desert conditions, was not found until far into the next (Mesozoic) Era of earth history.

The flat and dry landscape dominated the entire time from the end of the Devonian until the Cretaceous Period. There was probably a plateau landscape that lay a bit above sea level from the Devonian through the end of the Carboniferous Period. The earth's crust was still abnormally thick after the Caledonian collision and floated high up in the mantle. One can compare the continental crust under Norway from that time with a large iceberg floating on the sea (mantle). As the “iceberg” got eroded from above, it would rise up so that the top of it always floated above the surface.

Gradually, the earth's crust grew thinner, and finally the surface got eroded all the way down to sea level. The earth that got eroded away was carried by rivers out into the North Sea region's plateau landscape. We also find evidence for a large basin in Sweden, filled up with sand from the dwindling mountain chain to the west. It is not impossible that rivers transported material all the way from West Norway to Sweden, especially during the Devonian.

The North Sea Basin is formed

The North Sea Basin was created by violent forces that acted on the continental crust between Great Britain and Norway. The conditions that arose resemble those at the end of the Precambrian Era (see p. T31). At that time such processes continued right up until new oceanic crust was created. This time, the processes stopped at an earlier phase, at least in the North Sea region. The forces managed nonetheless to significantly stretch and thin the continental crust. Frequent fault movements, earthquake activity and volcanism occurred simultaneously. The African Rift Valley in east Africa is a modern example of how it might have been in the North Sea a few hundred million years ago. Here, the tectonic forces are working to divide East Africa in two.

Stretching and thinning of the continental crust in the North Sea area caused the region to sink down under the weight of the sediments that were transported by rivers from West Norway and other localities around the North Sea. The forces waned in intensity later in the Triassic Period, but they prompted a new collision toward the end of the Jurassic. Despite new earthquakes and more intense thinning of the continental crust, it was not torn entirely in two this time, either. The North Sea has since been a basin where the bottom has sunk deeper and deeper as sand and clay from the surrounding land areas have accumulated and weighed it down.

FAULT MOVEMENTS and the intrusion of Magmas

The stretching of the continental crust under the North Sea left its mark in Hordaland. A large number of faults and hiatuses were formed, especially along the coast. Many of them run more or less parallel to the coast, but northeast-southwest directional trends are also seen. During the Permian and Triassic Periods magma came up from the mantle along these fault systems. The magma solidified as vein bedrocks on their way to the surface. We know of nearly a hundred such vein localities today along the coast of Hordaland (see Espevik). The easternmost ones are found in the Fusa municipality and others from Sveio in the south to Fjell in the north (see THEME MAP) The veins are testimony to the stretching of the earth's crust also up on land, simultaneously as the rift was opening up in the North Sea. Lava may have flowed out from these veins, also, as in the Oslo area, where many lava flows from the Permian Period are preserved. In Hordaland, however, only the supply veins remain from this volcanic activity.

In the Bjorøy tunnel, sand- and coal deposits from the Jurassic are preserved in one of the fault zones along the coast (p. R364). This find shows that there were significant movements along the faults in Hordaland in the Late Jurassic or afterward. Earthquake measurements tell us that some of this faulting activity is still going on (p. R234). These fracture systems were important elements in the creation of the Hordaland we know today. Surface forces, especially glaciers, exploit such zones where the bedrock has been broken up and crushed. Here, it is easy to erode the surface. The result is steep canyons or straight valleys and fjords where the fracture zones are pronounced.

At the same time as there was stretching in the North Sea Basin, Norway was getting visits from earlier predatory lizards and afterward both peace-loving and more ferocious dinosaurs. During the Jurassic, dinosaurs were probably commonplace in Hordaland. Although we have not found any remains of dinosaurs in West Norway (the geological layers from the age of the dinosaurs is not preserved, with the exception of the find in the Bjorøy Tunnel), there is good reason to believe that they roamed here. For example, there are finds from boreholes showing that they were present on the fertile delta flats of the North Sea region. In fact, the first borehole from the Gullfaks Field went right through the vertebra of a carnivorous dinosaur from the Jurassic. And many finds both in England and on Svalbard show that there were a number of dinosaur species living in these areas at that time. It would have been most unusual if they did not make their way to Bergen at one time or another!

Cretaceous Sea flows in over Hordaland

The Jurassic lowlands of Hordaland were partly or entirely flooded when the sea level rose toward the transition to the Cretaceous Period. A layer of clay and sand eventually accumulated on the bottom of this sea. There were probably a lot of sharks in the water along with other prehistoric fish species, which were in constant danger of being eaten by, among others, dolphin-like marine reptiles. The dinosaurs, therefore, had to move inland as the sea level rose.

It is thought that the sea level was at its highest toward the end of the Cretaceous Period. Researchers believe that the sea level may have been as much as 500-600 metres higher over the entire earth. This sea level rise did not occur as a result of the Greenhouse Effect or "climate-gasses", as many are worried about today, but because spreading centres along the oceanic plate boundaries were more active, and therefore wider and in shallower waters, than during any other geological period in earth history.

From flatlands to plateau landscape

The flat landscape which was covered by water during the Cretaceous Period got lifted up during the Cenozoic Era. This process probably began around 60-70 million years ago and soon dried out most of Hordaland. We find sand some hundreds of metres down in the sedimentary sequence under the North Sea, that tells of large river systems that ran out into the sea to the west during this time. The first epoch with uplift is thought to have been connected with the formation of the North Atlantic Ocean, which was formed at that time. We know that when the earth's crust moves and drifts apart with the formation of oceanic crust, the land areas along the newly formed sea tend to rise. This is exactly what happened in our region: During the first part of the Cenozoic Era Hordaland rose from about 500 metres in coastal areas to over 1000 metres farther to the east. The freshly loosened deposits from the earlier Cretaceous sea were acted upon by rivers and streams. They were therefore soon removed by the upward rising, westward-leaning plateau that was formed. Eventually, the older bedrock became exposed many places.

A new period of uplift of Hordaland occurred also later in the Cenozoic. No one knows why, but Hordaland rose another 500-700 metres. A plateau landscape was formed - a landscape that eventually was worn down by river systems which, with renewed energy, carved down into the bedrock and gave the landscape new and even more characteristic features. Over time most of the valley systems were created that form the basis for most of the valleys and fjords we have today. As we shall see in the next chapter, we can nonetheless still see remnants of the old plateau landscape in the form of characteristically flat tops on many of the West Norwegian mountains. 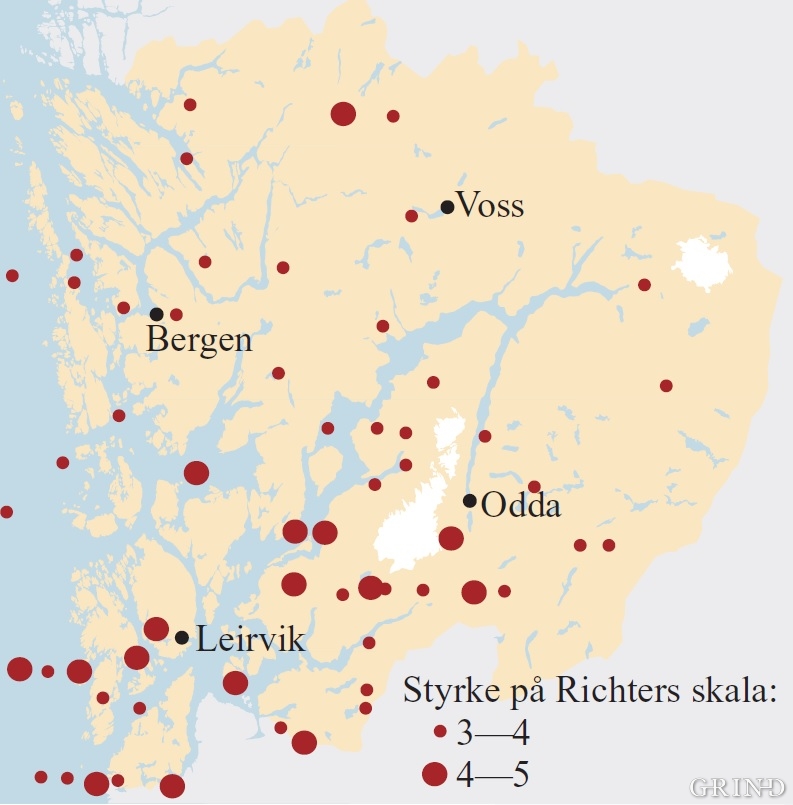 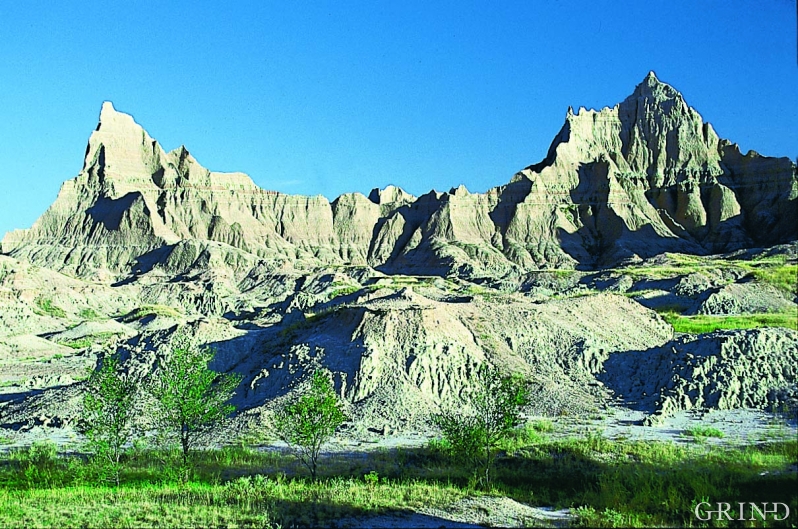