It is a general rule in geology that the farther back in time we go, the more fragmented and discontinuous the geological record becomes. We know therefore less about the Precambrian Era than about subsequent periods in Earth history. Another reason is that the Precambrian Era is several times longer than all of the other periods of Earth history put together. We know about the animal life in the Cambro-Silurian oceans and later land areas from geological evidence from other parts of the world, and we know that oxygen levels were lower. We have only found fossils of very primitive life forms from the Precambrian. The atmosphere was also undergoing change and was different from that we have today. In many places, including Hordaland, we call the Precambrian bedrock "the Precambrian basement". Our knowledge about these bedrocks, which comprise most of the earth's crust in Hordaland, is rather scanty. But we do know some things.

The best possible impressions of the Precambrian basement's earliest history are found in the southernmost part of Hordaland. While northern Hordaland and the Precambrian basement area west of Bergen were heavily influenced (metamorphosed) by the later Caledonian Mountain-building event, the basement area southeast of Hardanger Fjord escaped relatively unscathed. Here, we find deep intrusive bedrocks like granite and gabbro together with metamorphosed surface bedrocks that show evidence of a mountain-building event that came before the Caledonian.

The Precambrian basement in Hordaland is heavily dominated by gneisses and deep intrusive rocks. In addition, it also includes a suppressed series of sedimentary bedrocks sandwiched between volcanic layers, collectively known as the "Ullensvang Group". These surface bedrocks consist of sandstones, conglomerates and shales that were deposited while volcanoes were spewing out different types of lava and ash. It must have been quite dramatic at times.

Modern dating methods have been used to date when these layers were deposited on the earth's surface. The results suggest that it must have been about one and a half a billion years ago. The earth's crust is believed to have been thinner then and volcanic eruptions more common, at least in Hordaland. The Ullensvang Group was deposited on an even older crustal basement, which is difficult to find today. We think that there are remnants of this underlying crustal basement at Røldal and in Sveio. Locally we can locate the depositional contact between the gneiss basal layer and the surface bedrocks at these localities.

The Precambrian basement in Mid- and North Hordaland, which was strongly compressed and altered during the Caledonian Mountain-building event, also contains remnants of surface bedrocks. Quartzites are not unusual in western Stølsheimen, and dark gneisses rich in amphibolite and dark mica (biotite) could be metamorphosed volcanic rock types. Could these be surface bedrocks related to the Ullenvang Group? For the time being we can only speculate - there is still a lot that researchers don't know. The same applies to the Precambrian basement massifs that comprise the so-called Bergsdal Nappes in the area between Hardanger Fjord and Vikafjellet. These are huge masses of Precambrian basement that were torn loose in the west or northwest and transported toward Hardanger during the Caledonian Mountain-building event. Here we find thick layers of sandstone, conglomerate and shale together with volcanic rock types. There are many similarities between the basement of the Folgefonn Peninsula and in Sunnhordland, and age datings suggest that they were formed during the same period of the Earth's Precambrian history.

The base of the Ullensvang Group is believed to have been formed about 1.7 million years ago during what has been called the Gotiske mountain-building event. We don't know very much about this period in West Norway, but it is thought that North America and Greenland were joined together with Scandinavia to make one large continent. West Norway made up a kind of edge to this continent, and the whole thing resembled what is presently observed along the west coast of South America. Along West Norway then there was a subduction zone, where heavier oceanic crust was being pressed underneath Hordaland.

The Ullensvang Group "floated" in a sea of younger bodies of granite and gabbro that pressed their way up to become surface bedrocks. These bodies were intruded during a period of subduction and volcanism. Eidfjord granite and Finse granite are examples of this kind of granitic intrusion in the Precambrian basement. Radioactive dating suggests that the Eidfjord granite solidified roughly a billion (ca. 950 million) years ago. In the Precambrian basement on the Hardangervidda plateau and in the Caledonian thrust sheets, the last intrusive rocks seem to have been emplaced roughly 900 million years ago.

The Ullensvang Group in Hardanger was pressed together between the intruding granitic bodies. Both this compression and intrusion of deep bedrocks occurred during the last Mountain-building event of the Precambrian, known as the Sveko-Norwegian mountain-building event. Remains of this mountain chain can also be seen on Greenland and in eastern North America.

The Lindås thrust sheet in the Bergen area and Jotun thrust sheet in the Vikafjellet-Myrdal area consist of basement rocks that are in parts very different from those we find underlying the Precambrian basement in Hordaland. Anorthosites, anorthosite-gabbros and mangeritic deep intrusives are quite unusual rock types. They were strongly compressed or altered during the last part of the Precambrian Era, during the Sveko-Norwegian mountain-building event 1100-900 million years ago. It is likely that the anorthosite was originally a dark rock type which turned white, as it appears today due to alteration from the mountain-building event. The mangerite rock types, which have their type locality in Manger (p. 390), pressed their way in during this time, at the same time as the magmatic rock types intruded upwards into the Ullensvang Group farther to the southeast.

The Lindås and Jotun thrust sheets were later transported far to the southeast during the Caledonian collision. It is therefore not unlikely that they were originally a part of the American Precambrian continent that got left behind on Norway after Norway and North America began to split apart again at the end of the Precambrian. Or, they could have been a part of the American continent right up until the Caledonian collision occurred. There is a lot here we still don't know.

The precambrian draws to a close

After the Sveko-Norwegian mountain-building event, Greenland/North America and Norway began to drift apart from each other. The separation started gently about 700-800 million years ago with the stretching and thinning of the continental crust, at the same time as the bedrocks we see in the Precambrian basement got pushed up and then cooled. Eventually the forces of separation became stronger, and the old Sveko-Norwegian mountain zone got broken up by larger faults. One or more larger basins were formed along the Sveko-Norwegian mountain chain at this time, west of today's coastline. Rivers removing material from southern Norway flowed into this basin, and the land area was gradually ground down to an increasingly flat landscape. At the same time the basin filled up with large amounts of stone, sand and clay.

This basin was destroyed by the subsequent Caledonian mountain-building event, but large remnants can be found in the form of huge wedges of continent that got transported as thrust sheets up onto the mainland (see next chapter). One has to look all the way to Mjøsa in eastern Norway to be able to imagine the conditions which created this basin at the end of the Precambrian. Here we find among other things a fossil glacial deposit that signals a glacial period roughly 650 million years ago. At this time Norway lay far south of the equator, and we had a cold climate that caused glaciers to form. It is not thought that this ancient ice age lasted very long, however, and rivers carried more and more sand and clay out into the basin so that southern Norway was quite flat as the Precambrian Era drew to a close.

There is much evidence to support the theory that continents move in relation to one another. For example, satellites measure such movements, which typically are on the order of a few centimetres per year, or a few tens of kilometres per million years. Over the past 2-3 billion years, the continents have moved large distances in relation to each other. Hordaland, for example, has come together with the American continent at least twice. Each time the areas have split apart again because the plates subsequently moved away from each other. Hordaland is located near the margin of an ancient continent that is called Fennoscandia or the Baltic Shield. Other large continental plates include the African, American and Asian continents. Over geological time, all of these continents have grown in size through merging or the intrusion of new bedrocks during collisions with other continents. Continents have also expanded along their margins through repeated mountain-building events, so that continents tend to be oldest in the centre (i.e. Finland) and grow steadily younger toward their margins (i.e. Hordaland). It is the repeated collisions with the American continent that has shaped the geology in our part of this shield area. We know most about the last of these collisions. It gave rise to the Caledonian Mountain Chain - all of the next chapter is devoted to this Palaeozoic happening. Prior to this we had a collision during the Precambrian around 1250-900 million years ago, which was the Sveko-Norwegian Mountain-building event. In addition, there is evidence of a mountain-building event about 1500-1700 million years ago. The reason we know most about the Caledonian and least about the oldest of these mountain-building events is that subsequent events destroy many of the older geological structures. 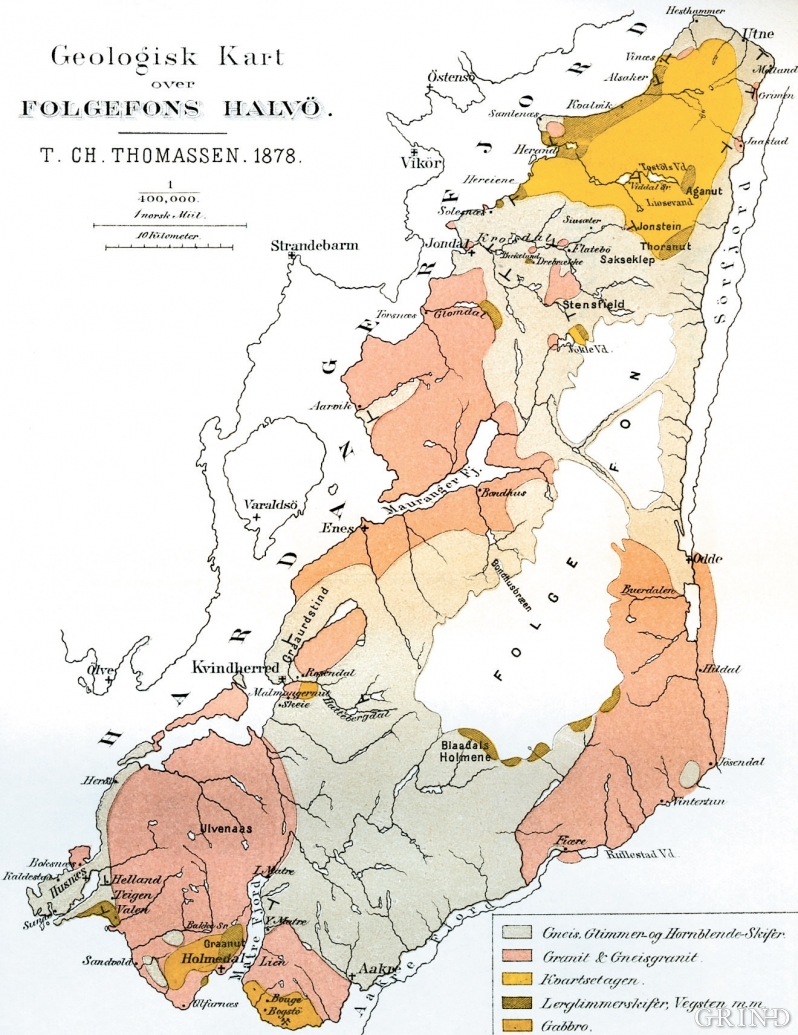 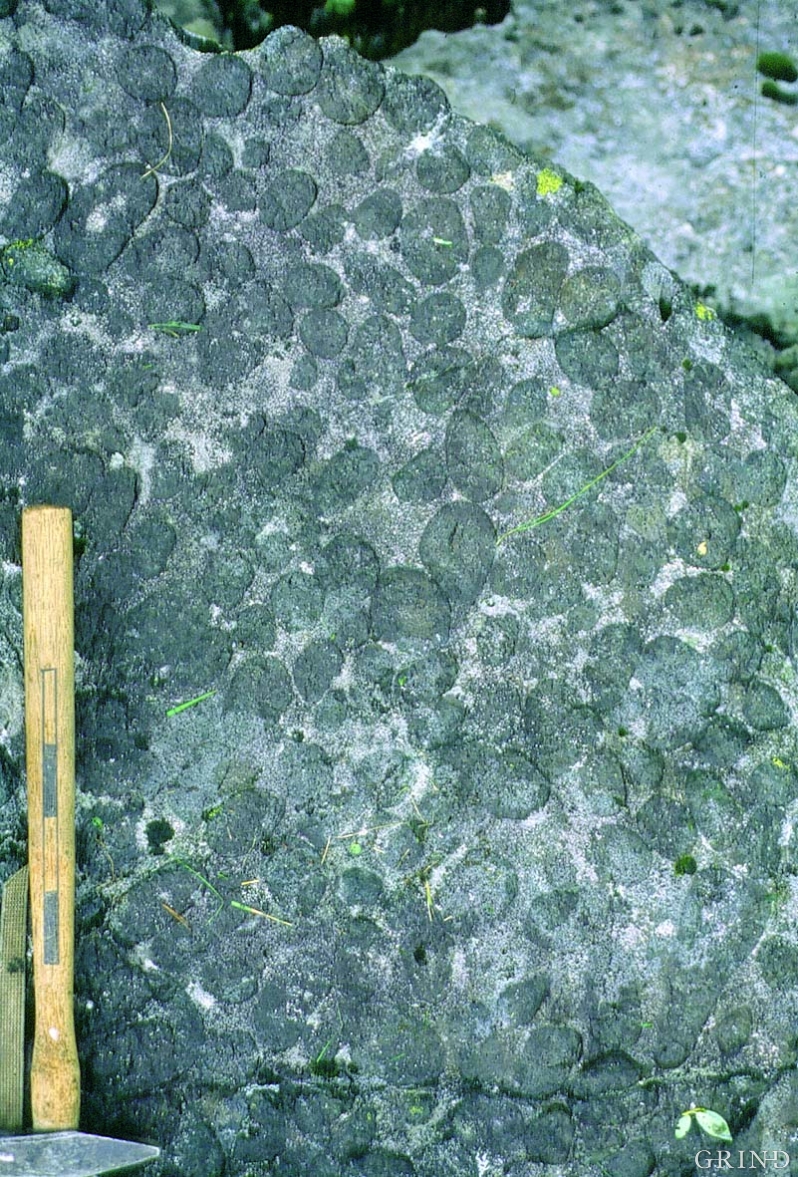 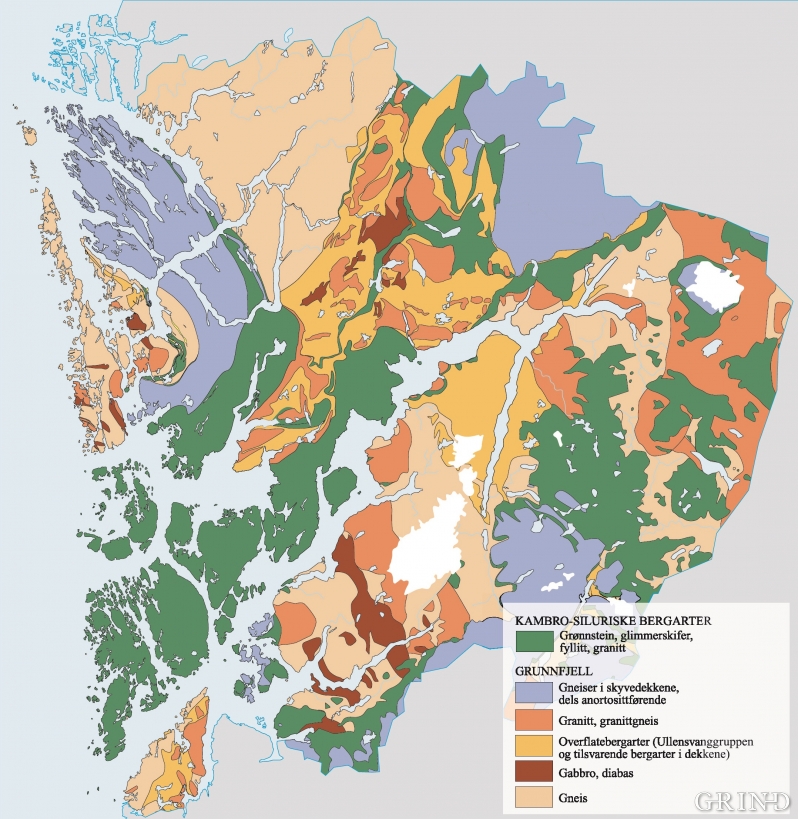 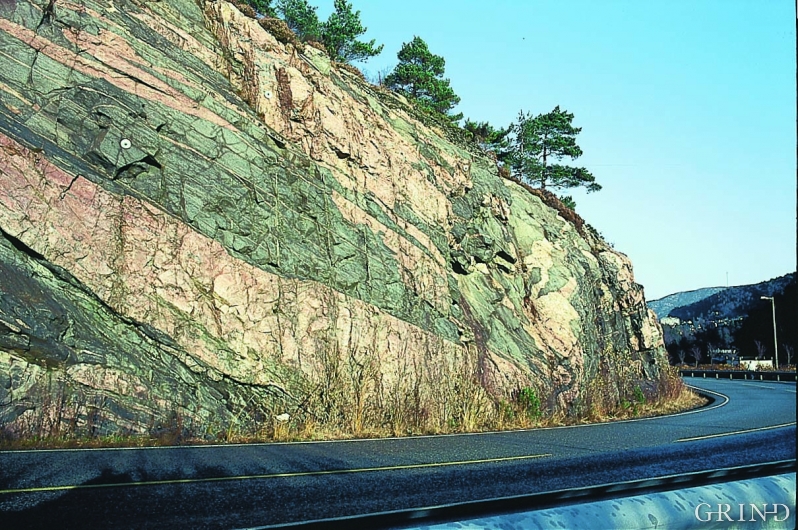 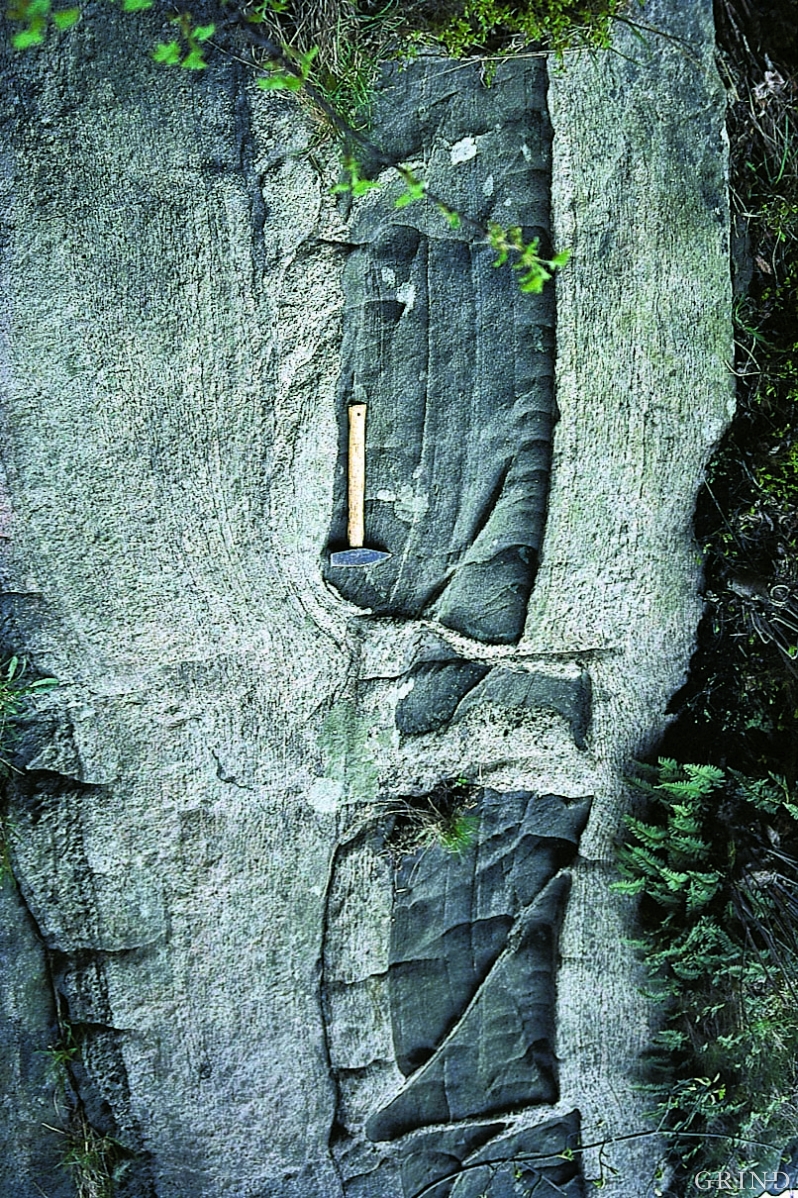 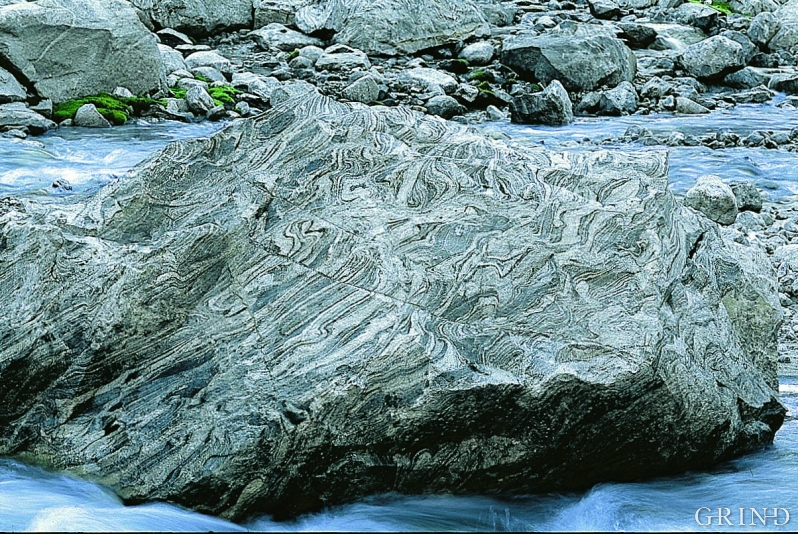