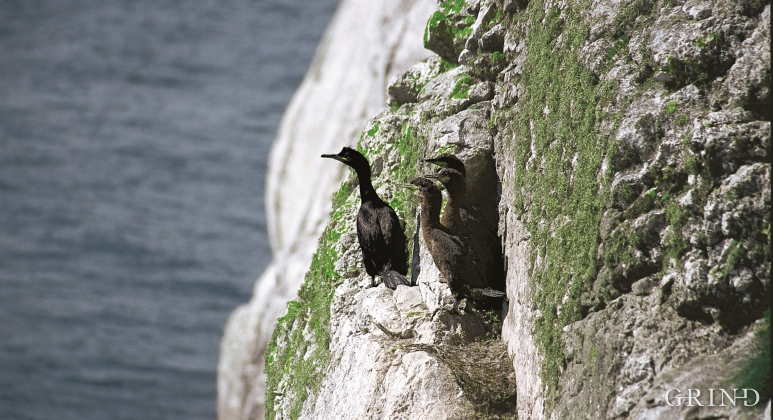 A flock of three youngsters is a lot for a shag, and is testimony to a good nutrient supply in the sea right by the nesting site. From Kvitingen nature preserve. (Stein Byrkjeland)

Fish and guests smell after three days, it is said. The cormorants do not need this long. If you follow your nose, the cormorant is not difficult to find.

But, don't! Where the cormorant nests out here, as on some of the islets at Møkster, tresspassing is prohibited. It is also not allowed to go nearer in a boat than 50 metres from land. Sea bird colonies on one of the islets, Myrbærholmen, were protected by law through a private initiative as early as 1953, making this the second protected bird area in Hordaland.

The cormorant colony by Mågabølet, Myrbærholmen and Kvitingen west of Møkster is perhaps the oldest in the county, but absolutely not the biggest. Today, it is doubtful that there are more than 10 nesting pairs here - the majority on rocky cliffs and ledges at Kvitingen. The Austevoll cormorants may have been more numerous earlier, but even if they aren't so many, they are very noticeable and easy to spot. Many more nest in the Sørøyane Islands on Bømlo, about 250 pairs have been counted there. Further north in the country there are bigger cormorant nesting colonies.

It is the cormorant's unvaried diet, fish, that explains why it smells so bad at their nesting sites. Even if their scent is awful, their appearance is majestic, with a strong metallic shine on their deep black coat of feathers. Sea birds must routinely be quite conscientious about cleaning their feathers in order to keep the water off their bodies and thereby avoid losing heat. But, the cormorant is different. They must often dive to great depths in order to catch fish. Then it is an advantage to be as compact as possible. They do this by letting water in through their feathers, such that they are wet right up to their skin. A wet cormorant is nonetheless not a good cormorant for long, so after a while they have to come on land and dry out. This is probably why we often see cormorants sitting on beacons and high rocks with their wings hanging out to the side.

Of the cormorants it is only the shag that nests in Hordaland. The majority of them overwinter near their nesting sites. Many also migrate northward under the fall migrations, in order to overwinter north on Sognesjøen. Norway has a unique responsibility for the shag. This seabird is designated a totally protected species. Most of the larger nesting colonies in the country are also protected. If we see a cormorant by the Hordaland coast in winter, it is almost always a Great cormorant. The Great cormorant nests from the Trondelag area (around Trondheim) and northwards.