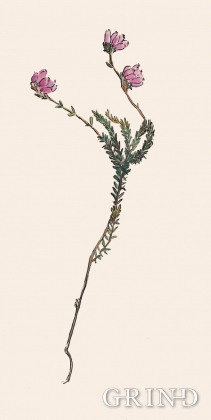 On the west side of Selbjørn, not far from the bridge over to Stolmen, lies Steinvik. On the south side of the road is a little area of a bit over a square kilometre that is protected as a nature preserve. The aim is to take care of the landscape that is so typical of the outermost coastal region of Hordaland. An open and uneven terrain with stubby crags, peat bogs and heather-covered moors, a landscape that is becoming more overgrown.

In the undulating heather moors by Steinvik there are bogs and tarns between the rocky crags. There are big areas with barren rocks on the dry grassy mounds, but there is also much heather: Scotch heather, cross-leaved heath (see drawing), purple heather and bearberry. The peat on the bogs is for the most part poor in nutrients. There, one finds only modest plants such as bod asphodel, bayberry and moor grass. Around the edges of the tarns one finds more moisture-loving marsh plants, white beak-sedge, slender sedge and bog bean. Farthest north in the preserve there is a boggy area that is rich in nutrients. Typical species here include broad-leaved cottongrass, tawny sedge, yellow bog sedge, lesser clubmoss and marsh arrowgrass.

In earlier times, a lot of peat was taken out from this area. Therefore, one can see heather or rocky crags of barren rock on slopes where there was bog earlier. Wild sheep graze in the nature preserve.