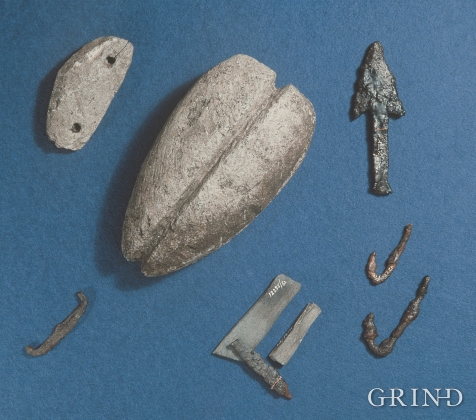 Archaeological fins from the sites at Risøya. (Svein Skare)

At the furthermost south-eastern point at Sotra lies the small, uninhabited island of Risøya. In a sheltered bay east on the island there has been found at least 10 old overgrown house sites and 7 boatsheds. At one time long ago there must have been many people living here. The low walls made out of boulders have been a foundation for wooden houses. On the site there have been finds of fish weights made of steatite, hooks, a harpoon point, sharpening stone, fire steel, fire flint and various other objects. There is nothing to indicate that women have lived here. The finds point to hunting and fishing. A lot indicate that these are remains of fjæremannsbuer (houses for sea crofters). Dating of the sites at Risøya shows that such traditions may go back as far as Viking times and the centuries just before.