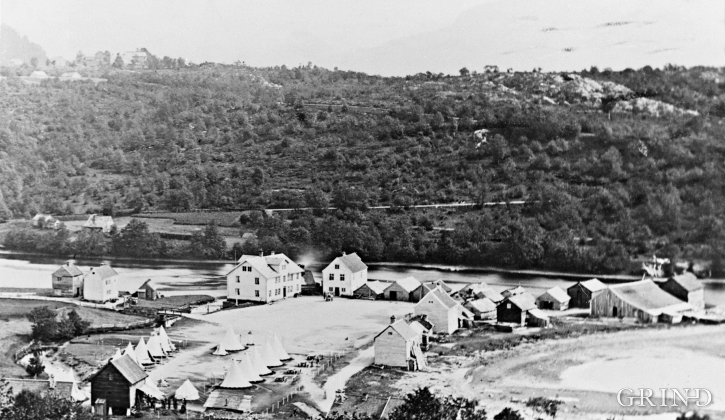 Up to the 1870s Osøyra was a military training area. Every church Sunday during the summer there were military exercises on Osøyra. (Knud Knudsen,owner Billedsamlingen, Universitetsbiblioteket i Bergen. Section. (KK 2150, 13x18)).

The coastal settlement of Os begins to take form in the middle of the 1800s. This is when craftsmen and traders begin to settle at the river delta.

The traveller arriving by the newly built Os railway in 1895, found a community centre in rapid development. A hundred years previously there was only a small hut down by the river mouth in addition to the boathouses for the farms Ulven, Luven, Skogen and Tøsdal. It is the boatbuilding in these sheds down by the river estuary that has given the Oselver its name. The delta at the mouth of the river, created by many hundreds of years’ deposit of loose sediments from the river, belonged partly to the rectory, partly to the neighbouring farm Moberg. The name itself “Osøren” has not been found on records before 1760. Little by little the church centre grew into a small community centre, with craftsmen, merchants and a transport station. An important function that was linked to the church ground, here, as in many other places, was military exercise. Around 1870 we see Osøyro as an aspiring community centre, the exercise ground with its white tents and the tent house at the end of the ground.