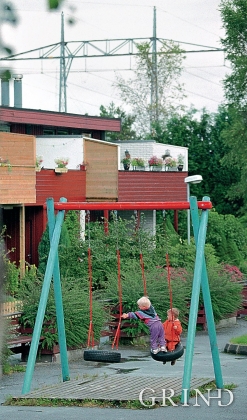 When the terminal at Kollsnes in Øygarden was going to be extended in the 1990s, environmental organisations, the local community and politicians demanded that a 300 Kw power line from Bergen be laid underground. It was clear that a new overground cable over this open landscape would be quite disfiguring.

With its high standard of living, scattered settlement, and large distance between the consumers and their power supply, there have been many power lines in Norway. How much of a health risk the emissions from these power lines in fact pose to humans, is a controversial topic, but it cannot possibly confer a heath advantage to have several hundred kilo-volts right overhead.

The uncertainty is of course not easy to live with, either. The birds have another problem: the lines right across their main migration routes is especially dangerous for the bigger, heavier birds, who have difficulty changing their flight direction quickly. Each year, several million birds are lost in Norway through collisions with power lines. One vulnerable species is the Horned Owl, but for this bird it is the smaller power lines that are the most dangerous. In Fjell, there is still a vital population of hornes owls, but only where there aren't power lines.