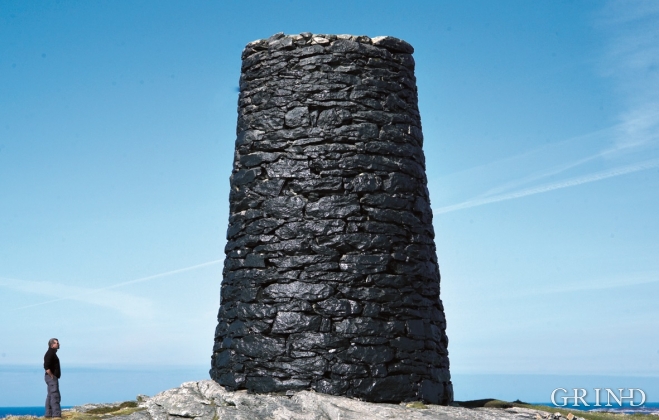 Coastal markers, such as crosses, bonfires and beacons have been important elements in a navigation system on the west Norwegian coast throughout the ages. We find a number of smaller beacons constructed without mortar along large stretches of the Norwegian coast. These beacons were mostly placed on the highest points on islands and rocks, and it is not unlikely that some of these go as far back as to Viking times in this form. Smaller beacons may form the core of newer and larger beacons erected by “Fyr- og Merkevesenet” (now: The Norwegian Coastal Administration) in modern times.

Turøyvarden (The Turøy Beacon) is such a coastal marker. It lies on the highest point at Turøy, outermost in the sea to the west of Sotra’s northern point. It was erected in 1896. It is made of granite with mortar and is virtually circular. It is around 5 metres in height and covered in tar. It is not certain whether a small and older beacon makes out the core of the beacon at Turøyvarden. It is visible far out to sea and is a useful coastal marker. Today it is a popular spot for tourists and local sightseers.