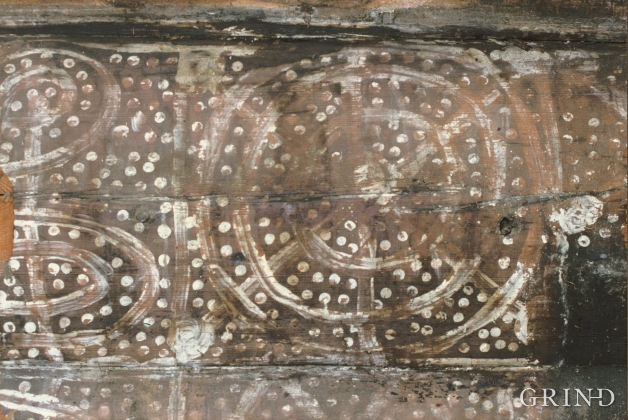 The decorations in the house from Li, which is now in store, show ancient motif traditions. (Nils Georg Brekke)

In 1981 an old loft-house was pulled down at Li. On the outside it looked much like the many similar types of houses from the 1800s, but the interior of this building contained traces of a cultural tradition which was very rare in these communities. In one of the two rooms the walls were decorated with large geometric figures, concentric rings with dots and crossed lines – figures that called to mind motifs from a completely different age.

The tradition of “krota” (decorating) geometric figures on the timber in the old houses was probably not rare at the time of construction. This has been a common custom through many centuries; to wash and decorate the interior for weddings and festivals such as Christmas and Midsummer. The ceilings in the blackened smokehouses were whitened with a mixture of water and shell sand or chalk. The timbered walls might also receive this treatment, but it was more common to decorate the timbered walls with geometric borders of figures carved in with a white chalk mixture – motifs gathered from the rich selection of weaving motifs. We know this tradition both from Hardanger, Voss, Sunnhordland and Nordhordland, but this house on Sotra shows that the tradition probably had been more extensive and had more variation in the patterns than was previously known. Because the patterns in the house at Lie lead our thoughts much further back than to the Middle Ages, without us being able to say exactly how old this inheritance might be.