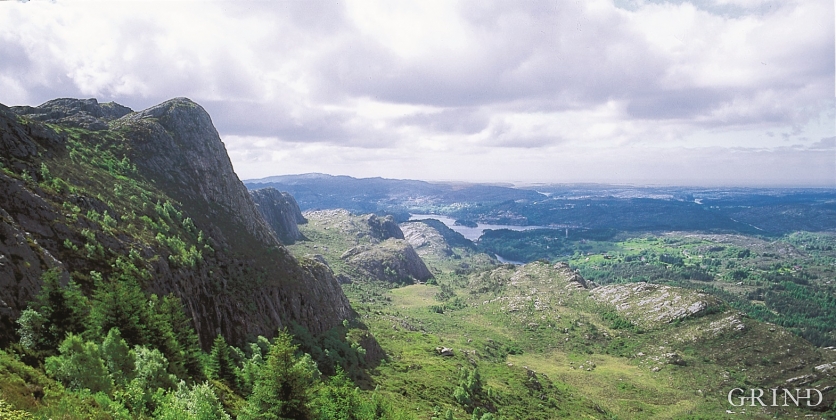 The saw tooth pattern is clearly visible from Skora Mountain southwards toward Tellnes and Skogsvågen. On these hanging walls, climbers find their playground. (Svein Nord)

The gneiss landscape west and north of Bergen viewed in profile can remind us of a saw blade of the kind that has long, slanted sides that get broken off shorter transverse sides. It has taken several hundred million years to file this saw blade, an enduring interplay between various geological processes.

In Fjell, the saw pattern is easy to see, on both the metre and kilometre scale. One sees the same pattern on Sund, Øygarden and Askøy, as well as in Meland. The pattern is easiest to see when one views the mountain formations from a distance, from the south or north. Then one can see how the gneisses rise toward the west. This exhibits the long, slanted sides of the saw teeth. With the divisions between them, the layers are broken up by steep, nearly vertical cliffs. The cliffs mark the fractures or faults cutting through the bedrock.

The geological recipe includes a resistant gneiss layer that stands at a slant, with a long row of fracture zones in the bedrock with the right amount of room between them. In addition, the fractures should run most possible across the direction that the gneiss layer slant in. And then the glaciers must come and help with the sculpturing. The gneisses have a long Precambrian history that we do not know much about, but we know that granitic and gabrroic magmas forced their way over them. During the Caledonian mountain-building event In Cambro-Silurian time, when Greenland and Norway collided, these Precambrian rock types were nearby, if not right in the middle of the collision zone. They have been pressed together at great depth and under high temperatures until they - about 400 million years ago - got tilted and assumed the layered appearance they have today.

Later, after the gneisses cooled down, new stresses in the earth's crust caused the bedrock to break up and move apart. Many of these faults and fractures formed simultaneously with the bigger faults in the North Sea Basin in the west.

During the past millions of years, the glaciers have plucked away at these fault zones as they advanced westward toward the North Sea. The glaciers carved out several valleys and sounds in the same direction as the fault zones. An example of this process is the notable landscape from Apalvågen over Fjæreide to Spjeld.

The steep, almost vertical cliffs here are magnets for rock climbers. The routes are exciting, even if the mountainside does not tower very high over the sea. The Haganes region is viewed as one of the country's best rock climbing areas. In addition to the cliffs, the climbing routes in Fjell offer hard, solid granitic gneiss. Hardly even lichen and moss manage to cling to this bedrock. In addition, 13 000–14 000 years with wind and weather have created a surface that gives good friction.

Profile across Sotra, from the north. The gneiss slopes toward the east. Liatårnet slopes evenly downward on its east side; the mountain surface mainly follows the layering in the bedrock. The steep terrain on the west side of Liatårnet continues southwards towards Tellnes, and is the result of vertical fractures in the bedrock and scouring by ice. The glacier that crossed over the mountain heading west, scoured more from the west side than from the east side. (Haakon Fossen/Inge Aarseth)