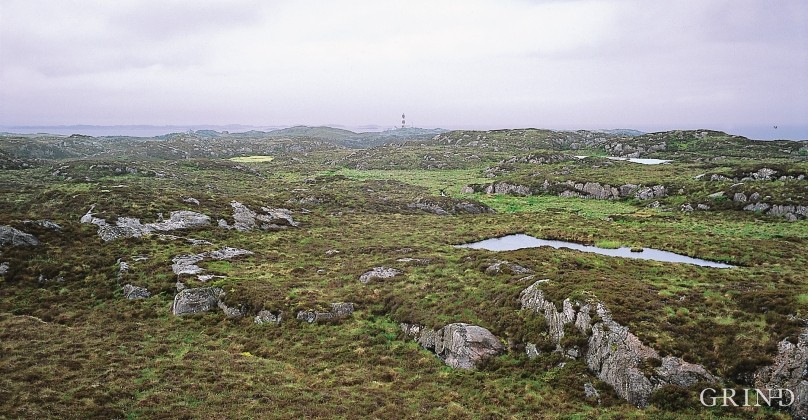 The wild rabbit is really native to Northwest Africa, but the Ancient Romans introduced them to large parts of Europe. Not to Norway, rightly enough: the population on Fedje originated from 3-4 pairs that were brought here from the Shetland Isles in 1875, making this their first residence in the country.

Normally, many rabbits are taken by foxes, but this is not a problem on the outer islands along the coast. However, mink can be a threat. Officially, rabbits have been set out only three places in Norway, but there may be other places, also. If someone asked for permission to set this species free in Norway today, the answer would very probably be no. In addition to on Fedje, rabbit has been set out on Edøya in Nordmøre (1902) and Mølen in Vestfold (1899). The herd on Mølen died out a long time ago.

On Fedje, however, they seem to manage fine. There are perhaps 15-20 pairs on the island, but there have been many more in the past. The mink nearly wiped out the Fedje rabbits. For a time the municipal authorities gave rewards for shooting mink, in order to protect the rabbits. It was mostly in Stormark in the southwest of the main island that they survived. Now there are less mink and the number of rabbits is on the rise. If you do not see the animals, you can at least see traces of them - the tunnels they dig are hard to mistake for anything else.

Today, we find wild rabbit mostly in the southwest of the main island on Fedje, but there are also a few individuals i.e. by Varden northeast on the island, where this picture was taken. The rabbit generally thrives in open areas at the transition between the cultural landscape and the heather moor. Densely planted plots of spruce area a foreign environment for the rabbit, even though it is just this which makes up the background in the picture.

In relation to its size there is a lot of protected nature in Fedje. Fedje bog alone comprises 838,000 square metres, nearly 10% of the total land area in the municipality.

Fedje bog is a gently undulating boggy area, that includes 17 tarns and smaller waters. Most of these are poor in nutrients. The dominant plants in the tarns are mare's tail, broad-leafed pondweed, white water lily (picture) and floating bur-reed. On drier ground, common heather dominates most places, but there are also good growth conditions for several other types of heather, cranberry and some birch. The outlying areas are divided up into unusually many strips of fields, which probably relates to the old peat mining rights.

Most of all it is the bird life in the area that gives the grounds for protection. Several pairs of nesting grey geese have settled down on the bogs, where there is not likely to be any problems with raising their young or finding swimming areas. One to two pairs of Loons and some Arctic Skuas also made their nests here. The Loon has been more sporadic in recent years, and the Arctic Skua has been absent, such as has occurred also other places in Hordaland. But the more common species, such as the Snipe, Red Shank and Curlew have held out. it is easy to walk on the Fedje bogs, since the North Sea Trail goes right across the area.

Grey goose on the rise

The Grey Goose thrives especially well on Fedje; at the turn of the millennium the municipality had about a fifth of the 150-200 total nesting grey goose pairs in the county. In the past, there was such strong concern for the Norwegian Grew Goose that land was bought for her to over-winter in Spain. Later, the geese began to over-winter further north, and the trend reversed. In recent years the population has grown considerably.

The goose is large and handsome, but can become a problem when it comes in flocks. It is a vegetarian, and can do damage to crops. Neither are its sausage-shaped excrements especially popular. On Fedje it is a source of irritation that the swimming area at Lake Husavatnet gets soiled by the geese, who even try to defend their territory when people come to bathe. There is also a concern that the drinking water might become contaminated.

South on the Fedje bogs there was for many years the only known nesting colony of Black-headed Gulls in Hordaland. Today, the species nests only occasionally on Fedje. (Ingvar Grastveit)