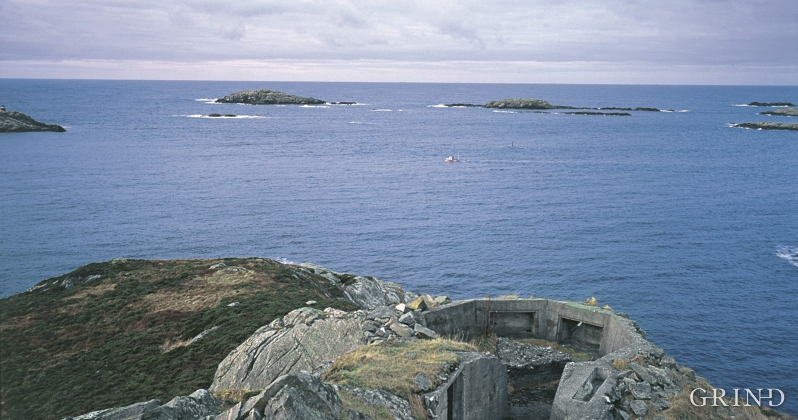 Vinappen lies on a low hill to the very west on the island. Here you have an amazing panorama of the sea. Originally the area was grazing land for cattle, but this changed when the Germans occupied the island. Just before WWII there was a small bearing station, used by the Norwegian Coast Artillery in connection with exercises at sea.

The area at Hesthaugen, just east of Vinappen has been an important area for the pilot service on Fedje. From 1929 and up to 1970 there was a coastal station at Hesthaugen itself. At the same place was a cabin for neutral guards during WWI - the coastal guard station operated by a guard group of six men, from the autumn of 1939 to the spring of 1940. Then the Germans took over the command of Fedje. The guard group’s duty was to report shipping traffic at Fedje. Outside wartime four men had a fixed salary to be available in case of a state of emergency.

In 1992 a facility for fire protection and the use of breathing apparatus was established at Vinappen. The administrative building is the old “White house”, a house that was used during the war to house two large generators. Fedje training centre is in charge of this facility. They run safety training for seamen, and have their main base at the harbour.

The defence installation at Fedje

Some weeks after the start of WWII, a boat arrived with German soldiers and two canons that were placed at Vinappen. A 40m high radar tower was erected at the house of pilot Martin Karlsen. Here German planes were guided to find their way to Herdla airstrip on Askøy.

The defence installation is limited to northern and southern Vinappen and Hesthaugegn In addition, there was a smaller installation in Toskarhaugen. In Vinappen and Hesthaugen it was possible to control the sea route from north to south, and the area was delimited by a fence and a minefield. The only access was through the guarded gate. Passes were issued for those with grazing areas inside the fence. Inside the area the coastal artillery and the air force were situated. The divisions had their separate facilities, but the officers had a joint officers’ mess. At the most around 400 Germans were stationed at Fedje.

There are still a number of war memorials left at Fedje. A pilot station was built on the site of the radar station and the food mess in Hesthaugen is now used as a youth assembly house under the auspices of the regional society.