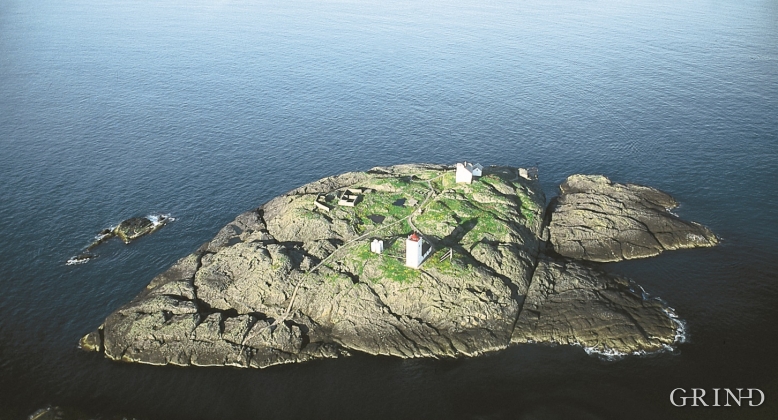 Holmengrå is the only place in Hordaland where we find traces of the abrasion that is supposed to have transformed Western Norway from a Himalaya-like high mountain landscape during the earth's Paleozoic Era, to a flat lowlands terrain during the Mezosoic Era. Just 400 million years ago, large and small stones plummeted down from the high mountains. Some of these stones became incorporated into the conglomerate bedrock on Holmengrå.

Here on the "outermost naked island", there are rocks from Devonian times. With the exception of Bjorøylaga, the conglomerates on Holmengrå are the youngest sedimentary deposits in Hordaland county. Geologically, they belong more naturally to Sogn and Fjordane, where there are much larger occurrences of conglomerate rocks from this time. From Holmengrå, one gets a good view over to the characteristic mountain formations in Solund, which are almost exclusively built up of Devonian conglomerate.

Conglomerates were formed when the high mountains that were created under the Caledonian collision with Greenland, got eroded down. Large blocks and smaller stones crashed down into the deep valleys or basins between the mountains. Some of the landslides must have been dramatic, since we have found blocks as big as houses near the islands further north. Along the coast of western Norway and Trøndalag (area around Trondheim), there were a series of basins during this period that gradually got filled up with layer after layer of sand, stone and gravel, totalling several kilometres thick. Holmengrå was believed to have been near the bottom of just such a basin.

We believe that its base, the contact surface for sedimentary rock deposits, is intact on Holmengrå. The conglomerates rest namely on a quartz-mica schist that bears clear signs of having been exposed to mountain-building before the deposition of the conglomerate.

The conglomerate itself is composed of cemented stones of red jasper, greenstone, different slates, granitic gneisses and quartzite. Holmengrå (“grå” = “grey” in English) is therefore anything but just plain grey rock. None of the characteristic rock types in The Bergen Arcs  have been found here. This suggests that the rock types in the Bergen Arcs had not yet risen to the surface when the conglomerate-stones plummeted down from the high mountains. Conglomerate from Devonian time is also found in Great Britain and on Greenland, which at that time lay much nearer to each other.

The Devonian Period spanned from about 415 to 355 million years before our time. This geological period is known as the time of the fish, since all of the main groups of fish had evolved by then. Both fish- and plant fossils are found in Devonian layers further north in western Norway. Devonian bedrock in Northern Europe, which also was created by the wearing down of the Caledonian mountain chain, is usually reddish. In western Norway, however, it is not red that dominates, but other colours: green, gold and grey.

The bedrock on Holmengrå distinguishes itself from all other Hordalands bedrock: Here, there is conglomerate with angular stones of various sizes, consisting of i.e., pink granite, grey slate and greenstone. (Haakon Fossen)

Holmengrå lighthouse was built in 1892, and met the need for guidance at the entrance to Sognesjøen. The light was placed on the roof of the keeper’s house. The 16m high brick tower, now standing, was built in 1955. Holmengrå was automated at the end of the 1980s. (Helge Sunde).