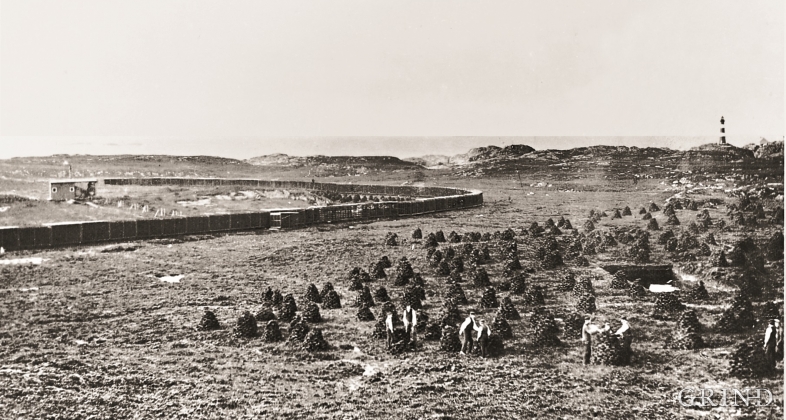 The extensive mining of peat on Fedje formed the basis for the earliest railway project in the county. From Stormark 1903. Hellisøy lighthouse in the background. (UBB BS Bs 6799)

Both the climate and people have been decisive in shaping the bog landscape on Fedje - a landscape that has been evolving over several thousands of years. The peat got built up layer for layer and provided income and fuel for the people of Fedje.

The blanket-like bog landscape on Fedje covers even the crests of the hills, not only the depressions and flat areas in the terrain. Several places the layers of bog are about two metres thick. This type of bog - blanket bogs or terrain-covering bogs - are most widespread in Ireland and Wales, on the west coast of Scotland and on the [*Vesterhavsøyane] islands off Great Britain, The Hebrides, Iceland and The Faroe Islands. This type of bog has developed over a long period of time, and gives fuel-peat of especially good quality.

In Norway, the blanket bog is relatively rare along the coast. Such bogs are more common, however, at the level of the tree limit in western Norway, for example, in Stølsheimen. In the mountainous areas with high rainfall and low summer temperatures, the evaporation from the land's surface is so low that peat is formed, also on the slopes, in a natural manner.

The blanket bogs on Fedje would not have been created without the cooperation of humans. In the outer coastal areas, there is often little rainfall, such that this type of bog normally would not form. It was the Stone Age farmers who first interfered with nature's order. As long as forest grows, much of the water is bound up in transport from the roots and out through the leaves on the tree. When the forests on Fedje got cleared in the Younger Stone Age, this form of evaporation from the land surface decreased. This lead to the soil being even moister than it had been previously. This tipped the balance of nature in the direction of bog formation.

Creating a blanket bog takes a long time. First, boggy soil must be built up until it can hold a sufficient volume of water. Thereafter, the growth of peat increases significantly. It takes about 2000 years for the bog volume to be large enough for bog production to really take off. When the bogs are 3500 to 4000 years old, as they are on Fedje and many other places in Nordhordland, they cover the landscape. This slow change in the type of landscape occurred everywhere along the coast of western Norway where the forest was cleared. In outer parts of Nordhordland they were just extra early: in most of the other places the forest was cleared a couple of thousand years after Younger Stone Age.

The blanket bogs are reckoned to be the best peat bogs. This is partly due to the fact that water drains more easily when the bog is situated on hillsides and over higher elevations. The peat gets more transformed, and on the bottom there is usually a thick layer with altered, black peat. In colloquial terms, this several thousand year-old layer is called "stone peat" or "coal peat". It is easy to decipher from its name that this kind of peat has an extra high value as fuel.

From 1875 until about 1920, Fedje Torvkompani carried out commercial mining of peat from the large blanket bogs on the south of the island. The production was so extensive that a railway corridor was built to the shipping port at Stormark. The peat from Fedje was especially sought after during the First World War. After the commercial mining was over, the people on Fedje continued to take out peat for their own private use. It was first in 1955, when electricity reached the municipality through an undersea cable, that the peat got out-competed.

Bog is an ecosystem that occurs where the groundwater level is high, without the soil being covered by open water. There will easily be a lack of oxygen when the soil contains so much water. The lack of oxygen hinders the breakdown of dead plant remains - such that the breakdown goes much more slowly than the growth of new plants. Eventually, a thick layer of dead plant material builds up, which we call peat.