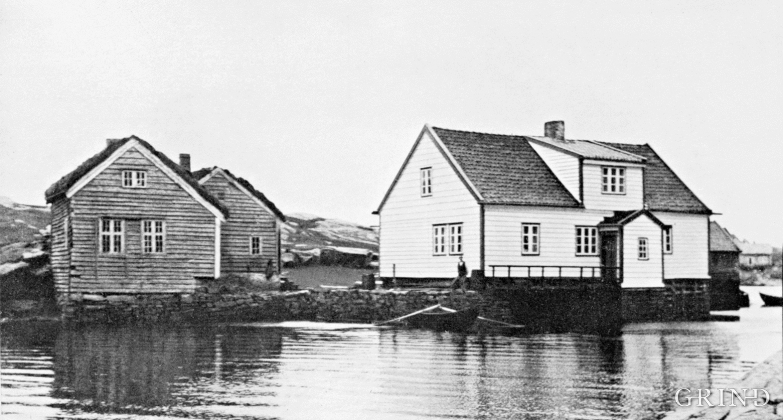 Kræmmerholmen photographed in early 1900. To the left is the house with “vicar’s chamber” and rough kitchen. (photo: O. Schumann Olsen, owner: Universitetsmuseet i Bergen).

Kræmmerholmen is one of the old privileged trading posts. From the 1600s all trading in West Norway took place in Bergen, and the farmers were obliged to travel into town in order to sell their produce and buy what they needed. In Bergen City Privilege of 1702 the merchants in the city were allowed to establish “Trading posts in the countryside”. The owner had to have residency in Bergen and the trading post was to be run by an assistant. In this way the city retained financial control of those living in the districts, and not least with buying and selling of fish.

At the end of the 1700s Kræmmerholmen was amongst the trading posts that had the largest turnover in Nordhordland, primarily because of the fish trade. Fedje was an important fishing port on the coast. In the fishing season fishermen from wide and far came here. Christopher Kahrs, one of Bergen’s richest merchants, bought Kræmmerholmen in 1799. In addition to the trading post itself he owned the whole of Fedje, with 34 tenants and all houses, he also owned Rongevær, Toftegård and the trading post Kjelstraumen in Austrheim.

The old main house at Kræmmerholmen was built in the 1700s. Here was living room, kitchen and bedroom for the merchant, and a store built on at an angle. Southeast of the main building are the remnants of a house with “vicar’s chamber” and a rough kitchen.

In 1842 a new trading law came into force, and this ended the privileged trading posts. They gradually evolved into becoming ordinary country stores. In the 1880s trading at Kræmmerholmen came to an end. The old tourist town and seaside houses were formerly open to the public with restaurants and accommodation, but are now in private use.