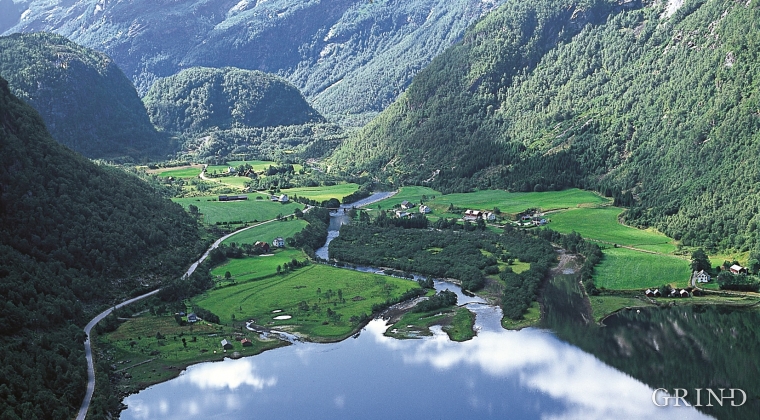 The Haugsdal delta with Storholmen and the lower part of Haugsdalen. Inwards into the valley, we can see flat terraces - "dried out" deltas that were originally deposited out in the fjord when the sealevel was higher and reached farther in than today. (Bjørn Moe)

Early in the 1900s there were much larger salt water deltas in Hordaland. But, essentially all of the larger river deltas got filled in and regulated for use in industry during the last century. Now, there is only Haugsdals delta left.

This natural archive lies only a short distance from the European Highway, down the old road through Haugsdalen valley. The river delta is influenced by agriculture and the water levels by the power station, but there are few constructions to lead the river water away, as is known to occur other places. The water prevails, and the river decides itself where it wants to run out into Haugsdalsvågen Bay.

Haugsdalsvågen Bay is naturally shallow, and therefore the water becomes relatively warm on sunny days. Where the river water flows out, the fresh water flows on top of the brackish fjord water. When the tide comes in, the brackish water flows inwards, reaching a good ways up into the river. Such transition zones are usually highly biologically productive.

There are almost always gulls in this area. Haugsdalselva River and the nutrient-rich delta also have a good population of Common Sandpiper. In nesting season we can see Lapwing, Oystercatcher and Red Shank. Also flocks of Mallards collect on the delta outside of the hectic nesting period. A few pairs of Red-breasted Merganser are nearly always to be seen, probably because they feed on the stickleback. But most of all, the Haugsdalselva River is known for its sea trout fishing. The river is among the very best sea trout fishing rivers in the county. The most popular fishing site for sea trout is nonetheless in the bay outside. The sea trout has, in contrast to the salmon, so far done just fine in this river, despite the regulation of water levels and the acidity.

Today's river delta is the last in a long chain of deltas in this area. Several flat terraces in the lower part of the valley are the remains of older river deltas. Through thousands of years, the river has transported sediments down through Haugsdalen, and these deposits ended up as deltas in the fjord. As the land gradually rose after the Ice Age, the old deltas were left high and dry. In the next round, the river cut down through the dry surfaces and took along some of the deposits, to steadily lower-lying deltas out through the bay. In the middle of the river mouth, a sand bank was deposited with a river channel on each side, as we see at Storholmen today.

Haugsdalen is a typical example of a little valley from western Norway, even though the building of power stations has changed its nature somewhat. The direction of the valley reflects two fracture directions in the bedrock, north-south and northeast-southwest, which the river exploits in its carving. The glaciers have evened out the directions such that the valley curves have become more rounded. The glaciers have also carved many troughs where lakes now lie. Between the lakes, rivers often run in streams or waterfalls, such that the length-profile takes on a step-wise appearance (see diagram).

The upper part of the Haugsdal water system is little changed since the time that the river ran all the way out to Fedje, by Holmengrå, before reaching the sea. When the Ice Age set in later on, the landscape further west first felt the effects of the enormous forces of the glaciers. Sure enough, the glaciers carved out some smaller lakes in the mountainside innermost in the valley, but it was the carving of the fjords and the deep part of the valley that was its main creation. As the fjords got scoured out, the distance from the mountain to the fjord decreased, and the valley grew steeper. River and ice therefore gathered forces as they continued to carve down through the landscape. Therefore, the valley is steepest and youngest at the bottom, where landslides now try to even out the steep mountainsides.